It’s a funny thing, but despite all the predictions and over-the horizon talk we continually hear around emerging technologies, I can’t recall any ‘futurists’ predicting the impact personal technology access is now having on our very young children.

It’s not that there’s anything wrong with anticipating future trends per se, it’s just that we seem to get it wrong more often than not and therefore we are often simply not prepared for what happens. Using a ‘keyboard’ a third the size of an adult hand as our main form of communication is a classic in this regard, as no-one, let alone companies like Nokia, Intel and to an extent Microsoft saw mobile coming, let alone understood the impact that it would have on our lifestyles, let alone our learning. Yet at the same time some educators were distracted by the likes of Second Life and its ilk in the belief that it was the ‘next big thing’, while ubiquitous access in all its forms was rapidly undermining many of the assumptions on which much of our legacy practice had been developed.

But if you think a digitally-rich class of 15 or 16 year old students with devices is challenging enough…. try a 1st grade class of 5 and 6 year olds. 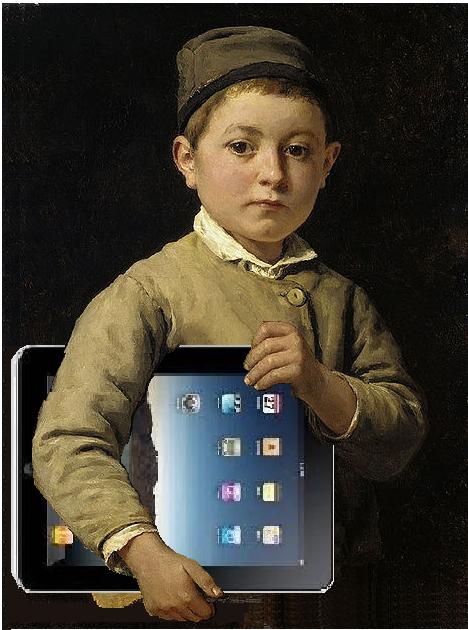 This changes the game. This is the beginning of a truly profound shift that I believe will ultimately have far more impact the way computers will empower our learners than anything we have seen to date.

But also let’s be clear here that we are not talking about dispensing with all that we know so well about early childhood education. We’re not denying the need for sand, and clay and blocks and kids playing, and we’re certainly not throwing away all the pedagogical wisdom of Marie Clay and Reggio Emilio et al. What we are saying is our kid’s world is now very very different, and what is now needed is for us to understand and to interpret our pedagogical knowledge in context of a technology-rich learning environment; and rather than be confused, overwhelmed or intimidated by all of this, we should see it as a once-in-a-lifetime opportunity to explore new horizons of learning.

In the first instance this is about push, not pull. While many parents are concerned about the impact technology is having on their child’s life and issues such as ‘screen time’, they continue buying devices, be they tablets or smart phones for their very young children at an unprecedented rate. Indeed Commonsense Media reported recently that 72% of children age 8 and under have used a mobile device for some type of media activity such as playing games, watching videos, or using apps, up from 38% in 2011 while today, 38% of children under 2 have used a mobile device for media (compared to 10% two years ago).

But be aware, this is not 5 or 10 years ago when the school might have been the driver initiating a 1 to 1 program, this is about parents wanting to be in touch with their kids 24/7 and it’s about entertainment and recreation, and too often, passive babysitting; all of which have incredibly significant implications for both parenting and teaching. Personal technology is now seen as a consumer item like a TV or watch (sic), and families now will equip their very young kids despite, or in spite of whatever their local school is doing to cope with this shift.

So here is opportunity. We now have to accept and better understand this emerging reality and look for ways in which we can help our parents be better informed about the benefits and challenges of technology use through early childhood.

As is always the case, much of the early dialogue has been focused on the ‘baddies’, which range from all the core issues we already know about around digital citizenship online safety and privacy, while to date there has been little focus on what the positive outcomes might be.

But just for a moment, think about what this might mean for very young students.

While I can only touch on the possibilities in this column, I would suggest that the implications of technology use in early childhood will ultimately finally lead to a genuine transformation of much of what we know as school today.  Why, because in many of our schools, some of their best teachers teach beginning students; they often have the strongest pedagogical foundations, are usually some of the most innovative, and accordingly their classrooms often demonstrate flexible teaching strategies integrated studies and a strong inquiry focus that builds on the natural curiosity that kids bring with them when they come to school for the first time. This then is now a place where great things can happen with technology and learning.

As just one example, let’s have a brief look at the possibilities around traditional literacy acquisition.  Much of what we have seen used in early childhood to date has been focused on very low level substitutive applications which has largely been a function of limited access and timidity or ‘pedagogical caution’.

But rather than using the technology to simply allow kids to do the things they have always done, what if we just went back to what we know about how kids learn to read, and looked for more profound ways that computers might empower their literacy acquisition.

For instance, what software might we develop that would allow us to better support a child’s awareness of context cues, those that are syntactic, and of course grapho-phonic cues. Are there creative ways that technology might allow is to provide the degree of repetition that is required to build the fluency necessary to becoming literate?

As someone who has long provoked audiences with the suggestion that possibly we should let very young kids write on a keyboard before we teach them to handwrite, I was also very interested in a series of initiatives that built on that concept and were undertaken in Norway, Sweden, Finland and Estonia.  It was part of a longitudinal study completed by Arne Trageton  and reflected some very ambitious ideas around writing to read:

Using the computer as a writing tool, instead of relying on complicated handwriting, made this “revolution” possible.

I believe, like Chomsky (1982), that writing is easier than reading, and should come first. Because handwriting is difficult for 5- to 7-year-olds, writing on the computer should come first, and the teaching of formal handwriting should be delayed until grade 3 (8-year-olds)….. …they will, in addition, develop letter knowledge, use individual combinations of the phonics and whole language reading methods, and the understanding of the total text becomes meaningful language.

After reading their own texts, children advance to read unfamiliar meaningful texts produced by their peers, and from interesting books in the library.

While this is obviously still very early research work, it is encouraging to see this level of research which offers so much more scope and possibilities than so many of the clichéd ‘apps’ that litter tablet screens.

Indeed at a recent conference in New Jersey a paper by Meeli Pandis showed further that the impact of having young children write on a computer as a literacy strategy resulted in higher writing levels, an easier pathway to reading, reduced reading problems, better motivation for both writing and reading..and better handwriting once they started at the later age. These are the sorts of ideas and findings we should be sharing with our faculty and our school communities to help them better understand what early childhood technology use might mean.

This is a space that should command our attention, as there’s so much we could be doing….and this is certainly is only the tip of the iceberg. To quote Trageton again, think of the research opportunities to find out….

What are the conditions for successful implementation in a school, community, district or at a whole country level?

If PC writing up to 8 year old give better results than hand writing?

Are the results specific for the first studies? For Norway? Replication in many other countries?

What genres, genre combinations, superstructure, inter texts multimodal texts do we find in the computer texts?

Invented spelling, phonologic, orthographic. What is the development in detail?

The touch writing system on PC: What effect on writing has the dominance of use of kinesthetic/tactil senses? On different students, different learning styles?

And one final thought. As this more ambitious approach to the way our very young kids engage with the technology to empower their learning in these ways grows momentum, what will be the impact when those students come to our high schools? ….but that’s a discussion for another time.