It’s interesting, to me at least, that whenever I have conversations about the role of power in school cultures, it seems everyone feels powerless.

Students, who sit at the bottom of the “power org chart,” feel they have little or no ability to influence the ways in which they experience school. School isn’t a choice for those that find themselves there, and they rarely exist in school cultures where they have a determining voice in what happens to them in classrooms or within the larger system. While some students may be given a bit more agency to choose what they learn and how they learn it, to call those students “empowered” would be far from accurate.

Teachers may hold power over the students they teach, but few I’ve met would describe a great deal of agency or self-determination in the larger context of school systems and cultures. They may participate in PLCs or in “shared-decision making,” but when it comes to their ability to engage in choosing and implementing new or different practices, most would express little or no voice in that process. (“Top-down” anyone?)

Principals and mid-level administrators in schools more often than not feel hamstrung by evaluation pressures, paperwork, discipline issues, and other time-consuming requirements that seem to render any extended, consistent, serious conversations about school change or improvement almost impossible. On more than one occasion I’ve had admins tell me they are so busy managing the practices they wish they could change that they don’t have time to work on changing them.

And superintendents, those would seem to be at the top of the chart, often complain of state mandates, disputes among various groups in the community, board personalities, tight budgets and more.

It’s a pretty bleak power picture. And it also speaks to the deep need for control the system exerts on all parts. Everything must be “data-driven” because how else would we know where we must exert more control and, most likely, take away more power and responsibility?

Changing schools to more fundamentally align with our beliefs about how people learn no doubt requires power. But as Seymour Sarason (yes, him again) suggests, it’s not about getting the people in their current roles to use their power more effectively. It’s about rethinking who has power and who does not in the first place.

“Any effort to deal with or prevent a significant problem in a school system that is not based on a reallocation of power is doomed.” 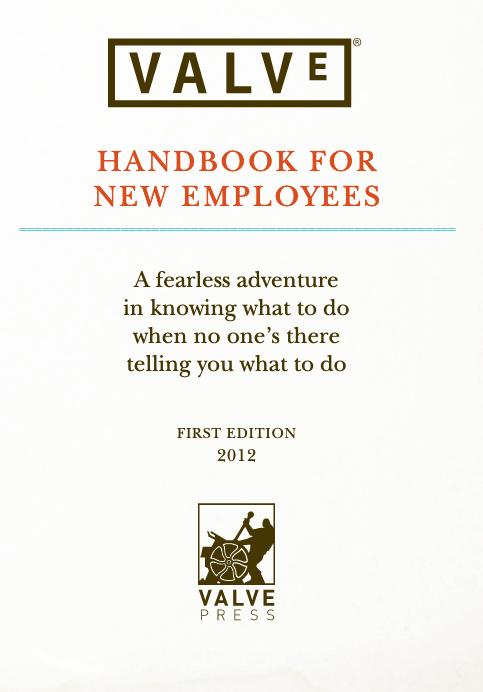 Well, if you want the far end of the power continuum outside of education, there’s no better place to start than with the Valve Corp. New Employee Handbook. Over the years in Change School, we’ve used it as a starting point for all sorts of interesting conversations around what might be different if we created relationships where individual agency was supported by a high level of trust. I mean, imagine being in a work culture that is described as “A fearless adventure in knowing what to do when no one’s there telling you what to do.” Seriously, read that again. (And seriously, what if our mission in schools was to prepare students for that, both in the workplace and in the world writ large?)

Here are a couple of snips that speak to the “power relationships” at Valve:

We’ve heard that other companies have people allocate a percentage of their time to self- directed projects. At Valve, that percentage is 100. Since Valve is flat, people don’t join projects because they’re told to. Instead, you’ll decide what to work on after asking yourself the right questions (more on that later). Employees vote on projects with their feet (or desk wheels). Strong projects are ones in which people can see demonstrated value; they staff up easily. This means there are any number of internal recruiting efforts constantly under way.

Nobody has ever been fired at Valve for making a mistake. It wouldn’t make sense for us to operate that way. Providing the freedom to fail is an important trait of the company—we couldn’t expect so much of individuals if we also penalized people for errors. Even expensive mistakes, or ones which result in a very public failure, are genuinely looked at as opportunities to learn. We can always repair the mistake or make up for it. Screwing up is a great way to find out that your assumptions were wrong or that your model of the world was a little bit off. As long as you update your model and move forward with a better picture, you’re doing it right. Look for ways to test your beliefs. Never be afraid to run an experiment or to collect more data.

In many ways, the Valve Handbook is more about culture than power. But you can’t really separate the two. And it does suggest that the fewer constraints put on the lives of everyone in the system by the power relationships surrounding them, the more opportunities there are for those individuals and, importantly, for the system to learn.

And that’s the rub, right. The more power is unevenly distributed throughout the school structure, the less learning happens, the less we have power to learn, which should be the guiding aim in our work, to expand, not reduce that power.

In many cases, power (and its variants, like “empower”) have developed connotations of one-directional action. Most people who say, for instance, “We have to empower people” are subtly implying that the receivers have no power other than the power being given to them, and that the internal powers that human beings have are valid only when granted legitimacy by external agents who possess knowledge, authority, or control…When we describe power, we try to maintain awareness that power from outside (an individual group, or organization), especially when unseen and unacknowledged, often disconnects people from their potential power from within (251).

In other words, we’re not powerless, but the long standing power relationships we find ourselves subject to makes it difficult if not impossible for us to employ our personal power in the service of our deepest beliefs, values, and commitments.

(For more on what we can do about leveling the power in schools, listen to my latest podcast with Sylvia Martinez.)