A few months ago I plopped myself down in a front row auditorium seat next to a young man with frazzled hair and braces who was looking uncomfortable in a collared, button-down shirt with an overly wide and ornate tie often seen on middle school boys.

He looked up at me and smiled an awkward smile and nodded his head. “Good,” he said. 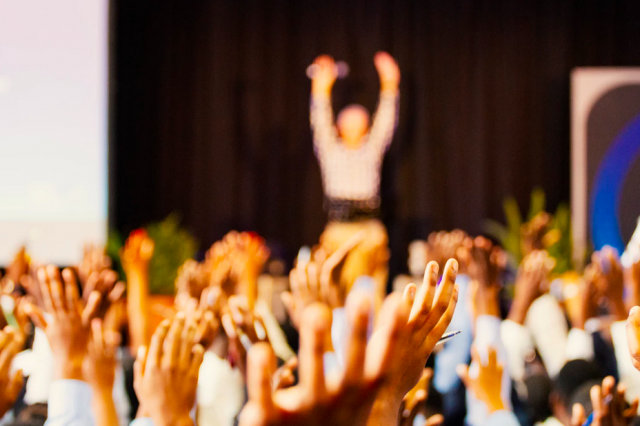 “Ben,” he said as he shook my hand weakly and stared at the badge hanging around my neck.

“You here for the conference?” I asked.

“Um, kinda,” he said. “I’m here to help people figure out where to go.” It was early. His shepherding duties hadn’t started yet.

“Looks like a nice place,” I said, craning my neck to take in a full scan of the theater. “Is this your school?”

“You like it?” I asked as I took a sip from a cup of tepid, pretty average hotel coffee.

“What’s good about it?” I asked, trying hard to keep the tone light.

“Well, the teachers are nice, mostly,” he said. “And they have a lot of good clubs and stuff.”

“Um, I like robotics,” he said, running his hand through his hair. “We do a lot of competitions and stuff and it’s pretty fun.”

“Awesome! Congrats,” I said. “So what is it about robotics that you like?”

“Well,” he said. “Lots of stuff. We get to actually build stuff. And we get to learn how to program and make the robots do all sorts of cool stuff. But mostly I just like hanging out with my friends and doing fun stuff.”

“So are you or your friends showing off any of the robotics stuff today at the conference?” I asked.

“Are there any kids here besides the ones helping people get around?”

“My mom’s the principal,” he said.

I’m on the phone with the superintendent of a “high performing” Midwestern high school discussing the logistics of their opening day.

“I really want you to push our thinking,” she says. “We’re really trying to redefine the way we do classroom learning. All of our sessions after your speech are focused on how we create more opportunities and agency for students.”

“Sure,” I say. “Happy to do that. How many people are you expecting?”

“Great. Will your board members be there?” I ask.

“Maybe one or two,” she said. “We invite them every year but most of them don’t come.”

“How about students?” I ask.

“Well,” I say, “you’re going to be talking about how to redefine your classrooms, right? Just thinking it might be good to have students in the mix of those conversations.”

“You know,” she says, “that’s a really interesting idea.”

“What if students unionized?”

The question came kind of randomly in the midst of a pretty intense online coaching conversation with a group of school leaders. More than one person chuckled.

We threw out some ideas. No homework. More recess. No boring textbooks.

That one caught me. “So what would that mean?”

“How about a vote?” one said. “I mean, what if we actually gave kids some say over what happened to them at school?”

I debated throwing out the Deborah Meier quote about how we want to prepare students for a democracy yet schools are among the least democratic institutions around. I bit my tongue.

“Sounds great,” one replied. “But you know what the problem with all of that is, right?”

“If we ask them what they want,” he continued, “we’d actually have to make some of that happen.”

I’ve been thinking a lot about some “Why wouldn’t we…” questions lately. This is the one that keeps bubbling up to the top: “Why wouldn’t we engage students at a deep level in conversations about their experience of school?” And what do we lose by not doing that?

The vignettes above are all true if maybe not 100% accurate in the dialogue. More often than not, educators get unsettled at the thought of kids being a part of conferences, or having a voice in how the classroom operates or looks like, or being a part of the decision making process that’s tied to rules and operations. Not sure how much of that is tied to the fact that they themselves don’t feel heard enough in the decisions being made about their lives, but I’m sure that has something to do with it. Giving voice means giving up power.

But it also means creating a more powerful culture of learning.

In MLC, we’re learning with leaders who are brown bagging it with kids regularly at lunch just picking their brains about school. Others who are asking students to run Ed Camp like conferences for teachers. Others who are making sure everyone on their teams gets a chance to follow a kid around for a day so they remember what it’s like to be a student. And others who are losing the all staff agenda in favor of having students present what they find awesome, be it in school or out, once a month.

None of these things are particularly onerous. But they do raise the bar. If you start asking students what they think and what they need, as mentioned above, you better follow through.

Regardless, why wouldn’t we do that?

1 thought on “Why Wouldn’t We…Learn From the Kids”