As I was blissfully wandering through yet another educational technology exhibition recently, albeit BETT in London, the largest in the world, I was wondering if we are really aware of who or what has the most influence on our edtech buying decisions.

In the midst of the millions of dollars spent displaying technology ‘kit’ at BETT, you’d have to reasonably suggest that either this is a sort of technology Mardi Gras or the industry believes it significantly impacts the buying choices educators make.

Now I for one quite like a Mardi Gras, and while I did find a large number of the BETT exhibitors to be more entertaining than informative, I do worry that others may not share my sense of humor.

For example, I was highly amused by the whiteboard company that proudly displayed its Inspired Collaboration tagline across its very expensive and expansive exhibition stand, but I nearly fell over when a competitor in the same field was seriously suggesting to educators that their whiteboards allowed students to Experience the Power of Learning Naturally.

While I think it is great to see humor displayed so openly at trade shows, I must admit in walking a little further, I was a little taken aback by the explosion in the number of companies who appear keen to tie up, lock up and secure laptops. Goodness, I never realised delinquent devices would be such an issue, but this year’s BETT show had no fewer than ten companies exhibiting their lockup wares. One stand had forty rather robust looking lockers that schools could purchase for a mere $40k, probably winning the Mardi Gras crown for most entertaining. I mean, surely no-one would seriously consider spending that sort of money keeping laptops away from kids when for the same amount of money you could simply give 80 kids their own device? Saves them stealing them, which I can only presume was the assumption being made, but I jest. 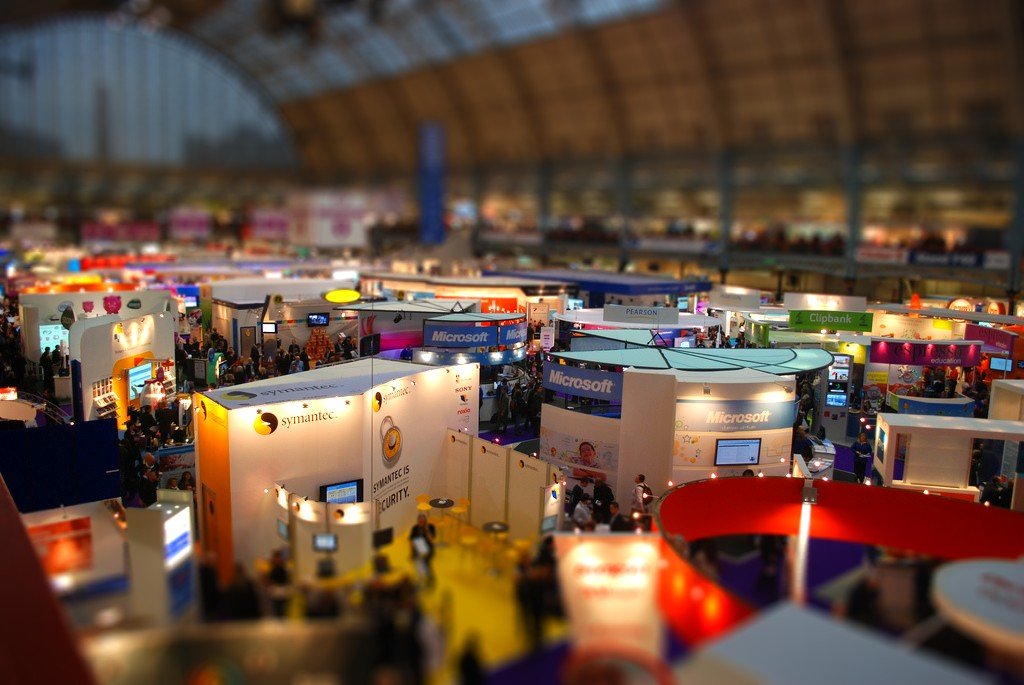 I must admit the same vendors did catch me out a few years earlier when they were rolling out delightfully colored and configured laptop trolleys, which I thought were just a sendup of labs-on-wheels. But no; they were serious. And blow me down if schools didn’t buy the things. We do often say that language matters, and the only explanation I can think of is that people mistook transformation for transport, and so they opted to put the laptops on wheels rather than let kids have them as personal devices. Pity really, but then the industry was only following the lead of educators…or were they?

Probably the two most frequent words I came across in walking around the 700+ stands at BETT were simple and easy, as in Seating Plans Made Easy and Simple Classroom Technology (iPads). I just wasn’t sure whether the appeal of simplicity was for students or teachers. Control and Management were also very popular, where the focus was on introducing technology that allowed classes to continue as normal. Not quite the disruptive process that Christenson et al have been talking about, but then who would want to suggest that disruption sells product?

ISTE’s show last year was a Flipping big one, and much as I do like entertainment, I’m not all that sure that we should be heading off to all these trade shows with the expectations we currently appear to have.

Today with the edtech sector now worth billions of dollars..or pounds, I think we might be too often looking for that thought leadership to come from industry rather than education.

I for one, have always supported the edtech industry, in particular those within it who are striving to build products around new and innovative ideas that impact on learning. To its credit, and in the best English tradition, BETT has always had its share of those innovative companies, going back to its most innovative phase of the early ‘80’s. It started in similar ways to NECC, the precursor exhibition to ISTE, with edtech startups which were often either higher ed spinoffs or former teachers working with industry in response to emerging ideas they had from classrooms. Some of the most impactful, exciting, innovative material, be it robotics, Logo, simulations or adventure games came from that time..and it came from education thought leaders.

Today I am not so sure. Today with the edtech sector now worth billions of dollars..or pounds, I think we might be too often looking for that thought leadership to come from industry rather than education. The edtech field is full of trends that become fads and then failures, and both the commercial and education sectors lose. While I realise that it’s a hard sell to promote change, or dare I say transformation, the impact of five or six hundred vendors seeking to maintain the status quo while endeavouring to sell their wares is too often overlooked. It is also more than reasonable to suggest that it is the industry’s role to respond to the needs of schools, not to try and lead them.

On reflection I worry that maybe we have underestimated the influence of this endorsement of our existing models of school and existing classroom practice. At BETT, as at ISTE and many other edtech exhibitions, there were extraordinary numbers of products whose main aim was to control, manage or monitor. Does this represent our priorities in developing a modern learning environment?

We have only ourselves to blame. Over the past decade we appear to have allowed the industry to set the agenda rather than the other way around. The commercial sector gains most when they have products or services that people want, not what they want them to have. The shift from desktop labs to 1 to 1 is a good case in point. Whether it was the PDA’s of the mid-90’s , palm pilots, or whatever manner of dumbed down device, we have too often allowed the industry to set the agenda for what device might be best for student use.

Maybe we are just scared, of maybe we just prefer to defer. Maybe isn’t good enough, because if we ever think that we can truly transform the learning experiences of our kids, then it would seem in everyone’s best interest that the partnership between the industry and education sectors be realigned. It’s currently out of balance.

How else can we explain the tens of millions invested and lost with companies like InBloom? How can we explain the poorly informed extremes that are coming out almost weekly from start-ups that are focused on ‘personalized’ learning and learning analytics? Is there an educator in the house? Is there anyone who is driving this irrational exuberance around edtech who actually understands the needs of schools, and their students?

Whether it’s the billions that are coming from venture funds or a lapse in our leadership, it is surely time for us to refocus the agenda. As much as I did find many things to laugh about at BETT, some things frankly made me cry. As much as I enjoy being entertained at a trade show, I would rather that I was more informed. It’s not a big ask, but I think maybe we need to be more aware of the influences we have to negotiate in making effective buying decisions.