Remember 1849 when everyone seemed to be heading to California in search of gold?

That’s the feeling I’m getting lately when it comes to change in education. Almost everyone seems to be trying to lay claim to “change” in schools these days. Chromebooks! Personalization! AI! It’s the new gold rush (though I doubt the football team in San Francisco is going to be renamed as the “17ers” any time soon.)  Seems “change” is really starting to become stylish, and on the surface, that would seem to be a good thing.

But I have two questions. One, how much of the “change” that we’re seeing right now is really more than novelty, surfac-y stuff that’s making us feel like we’re changing even though we’re not? And where will Chromebooks and personalization and AI be in five years? (See: iPads, flipped learning, and Second Life/VR as exhibit A.)

I’m struck, yet again, at how we seem to be ignoring the fundamentals. Maybe, ironically, we need a “back to basics” movement when it comes to change in schools. Maybe, starting with the old is a better way to “raise the bar” on change in schools rather than focusing on shiny new tools and dime a dozen adjectives. 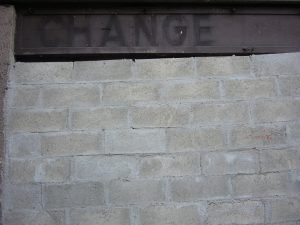 Like why don’t we raise the bar when it comes to the conversations we have about learning? It’s a lot harder to talk about learning in the context of what isn’t captured by hard data. We love being able to say our kids are “learning more” because our test scores went up or because more of them made it into the Ivies. But considering change in the form of just getting rid of grades all together? Too high a bar, despite tons of evidence that numbers and learning don’t equate.

Or, why don’t we raise the bar on teacher professional development? Instead of teaching teachers tools that they can learn themselves, or “training” them on some new “initiative,” why not have them make stuff? Solve a problem? Play? I mean, why wouldn’t we want teachers engaged in developing the same learning dispositions and literacies that we want our students to develop?

Could we raise the bar on the way we engage our parents and community about our work? The weekly newsletter or the random announcements on the school listserv or the annual superintendent’s welcome hardly scratch the surface of communicating change and whatever story of learning you’re living in your schools. What if you were telling stories through multimedia, Twitter streams, blog posts, and more? And what if we invited parents and community members into the school on a regular basis? Is that really too high of a bar?

We could, and should, raise the bar on technology, too. No question, it’s easier to employ an LMS that digitizes all of the functions of traditional schooling. If you have the money, it’s easy to do that with iPads or Chromebooks as well. Raising the bar on tech, however, means letting kids use them as their own (and left to their own) devices. It means teaching them the responsibility of caring for the device and making good decisions with it.

And finally, what if we raised the bar on advocating for real change in our statehouses and with our national representatives. Most schools seem to be in “Thank you sir. May I have another?” mode when it comes to onerous and detrimental state policies and initiatives. In these times, advocacy and activism are more important than ever. But for most, it seems, raising that bar is too risky and too difficult.

Those are just a start.

The problem with all of this is that most people and most institutions don’t like raising the bar. They’d rather have someone else do it and see how it goes before they figure it out for themselves. Raising the bar takes real courage and commitment. And it also requires a mindset that embraces the idea that the work of change will never be finished.

Luckily, there are those who are engaged in this work, and over the next few weeks, we’ll be bringing a number of them to you via the new Modern Learners podcast. The stories they tell about change are as inspirational as they are challenging. But they’re also about real, foundational change in the way we think about our work in schools.