When it comes to “student achievement,” I hardly know where to start.

Should I begin with trying to define it? Or should I start with the fact that hardly anyone defines it? Or that whatever definitions do exist suggest a total lack of consensus and coherence?

Maybe I could start with John Hattie and his 256 influences related to “student achievement” even though no clear definition of what that phrase actually means seems to accompany most of the lists sorted by “effect size,” leaving us to assume what, exactly, the “influences” are having an “effect” on.

Or, maybe I could start with the apparent lack of distinction between “student achievement” and “student learning” which, more often than not, are used interchangeably even though they are arguably very, very different things (depending, of course, on how you define them.)

But with all that, let me start here: It’s time to start de-emphasizing “student achievement” in schools.

Even though attempting to define “student achievement” takes us down a very slippery slope, I think we can agree that in most circles when those words are uttered, whether by parents or educators or kids, the inference is clear: we’re talking grades, test scores, or other data points that are easily measured. When we say things like “raising student achievement,” what we’re implying is that we’re looking to raise a number. Same when we come up with stupid ideas like tying a teacher’s evaluation to growth in their student’s “achievement.” Or when we rank schools based on it. 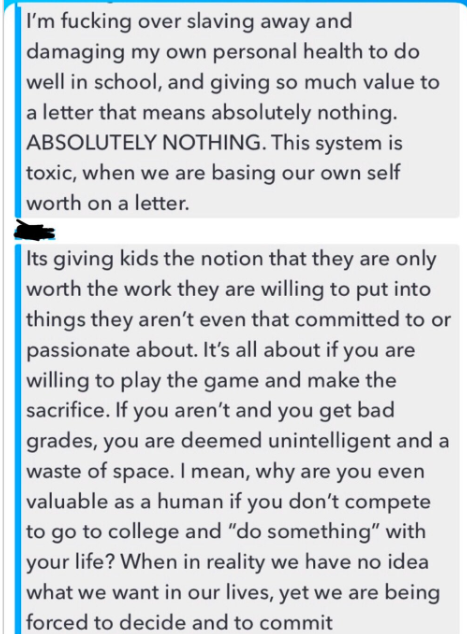 If you really want to understand what “student achievement” means in action, try asking some students how they would define it. See the extent to which their definition goes beyond whatever is easy to measure. A few days ago, Marissa Thompson Tweeted a screen shot of a text conversation between two of her students that, I think, captures what a lot, if not most kids think they’re supposed to be “achieving” in schools (although hopefully not to the same level of anger and stress.) In short, doing well in school, “achieving,” means getting good grades. (And if you think this is an outlier, read the replies…)

Now I’m certain that in many places, “student achievement” is seen as something more than just a number. For instance, a quick search brought me to this “Working Definition of Student Achievement and School Quality” from a group named Education Evolving. And I appreciate the honesty in the effort: “This is not an argument for why these definitions are the right ones; nor is it a proposal or a strategy for how to improve achievement and quality. Our purpose here is only to define the two terms.” What a concept. Their definition of “student achievement” actually doesn’t even mention numbers.

But my sense is that Education Evolving is an outlier in two ways: First, they took the time to articulate what they actually mean by the phrase, and, second, it’s focused on well-being and preparedness for life instead of doing well on an assessment.

As much as we may want to deny it, explicitly or implicitly, most schools promote an idea of learning that is built on doing well on the stuff that’s easy to measure. That means content recall, discrete skills used in a vacuum, and behavior that comports with the age-old norms of schooling (thank you Class Dojo.) No one (well, almost no one) measures curiosity or creativity or persistence or joy or all of those other dispositions and skills that arguably are more important to have these days than what currently constitutes “achievement” in schools.

This goes to the heart of a piece in Education Reimagined by Elliot Washor, the Co-Director of Big Picture Learning and the author of one of my favorite books, Leaving to Learn. He writes:

In education, we act as historians and accountants—collecting and analyzing endless streams of data focused on a narrow vision that leaves little room for change—rather than being inventors and trend setters. If we identified as the latter, how could we compare today’s 12-year-old with one from 1919? Then again, after collecting over 100 years of homogenous data, what do we have to show for it? We can’t expect to close equity gaps and provide higher quality education while relying on the system that created such gaps in the first place.

As Mark Twain said, “Supposing is good but finding out is better.” We need to collect different and better data using different and better measures that look more broadly and deeply at each and every student. This data collection needs to be connected to teachers being allowed to use their judgement, skills, and experience. It can no longer be detached, impersonal, and imposed solely by distant assessors (i.e. state exams).

In other words, they way we measure “student achievement” has to change. It’s starting; Mastery Transcript Consortium is just one group that’s moving away from numbers in a meaningful, sustainable way.

More importantly, the way we talk about “student achievement” has to be almost totally reframed. It’s one thing to come around to the idea that learning only happens when someone truly wants to learn and that achievement is more about becoming rather than the starting, stopping, starting, stopping, seat-time and course requirement driven experience of school that still predominates. It’s all together another to change a hundred years worth of an educational lexicon that is deeply ingrained in our conversations about and our experiences in schools.

So, What Do You Mean by student achievement?

As with almost everything, that starts with getting clear on just we mean when we say that phrase and the many other words and phrases that we use in our daily discussions about schools and education. A first step is to actually create a glossary of terms so that when you say words like “achievement” and “personalized” and even “learning,” everyone at least has a clue as to what you mean. Ideally, that means taking the time to engage everyone in the school community to come to some consensus around those terms (admittedly something few seem to have the patience for.)

It also means doing an audit of the tacit signals that you send as a school that make “achievement” more about numbers than actual learning. The signs trumpeting high test scores that hang on the front of the building. The awards night that’s focused solely on academics. The race to become valedictorian, and so on. What you choose to highlight about your school speaks volumes about what you deem important.

But in the end, the most important step in this reframing is acknowledging this difficult truth: “student achievement” and “learning” are not the same thing. In most cases, the former is more about figuring out how to succeed at the game of school. The latter is what happens when kids (and adults) pursue their bliss either inside or outside of school.

In his post, Elliot Washor quotes Ernest Boyer, the former head of the Carnegie Foundation, the creator of the “Carnegie Unit” that has driven so much of our work in schools. Boyer says, ” “I hope deeply that in the century ahead students will be judged not by their performance on a single test but by the quality of their lives.”

If we can equate “student achievement” with “the quality of their lives,” then we’ll really be getting somewhere.