On rare occasion, usually when I’m struggling with a bout of insomnia or boredom, I’ll hop on Twitter and take part in a “chat,” a usually unfollowable, fast-stream of 140-character observations and opinions from dozens (if not hundreds) of people that requires it’s own literacy and mindset to make even a modicum of sense at. (If you want a feel for the education Twitter chat universe, try this crowdsourced directory. Remember to breathe.) It’s three parts torture, one part fun, and perhaps a half a part learning if you can stick with it and be pick out what interests you along the way. 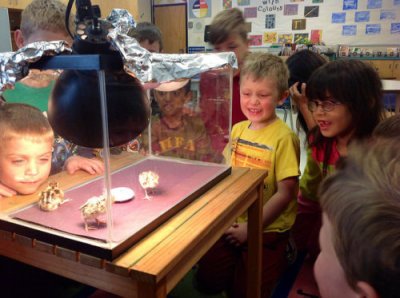 This past Saturday morning, just by chance, I found myself in the midst of the 7:30 am (ET) hour-long “#SatChat,” and the topic was “student engagment.” I’m guessing there were about 75 people from literally all over the world in on the festivities, and at various times, there were probably 30-40 Tweets a minute zooming by. It was impossible to make sense of the main stream, so I had a couple of subchats started with 4-5 other participants who were trying to peel back some interesting (to us) layers that wasn’t possible to do with the complete group. (It’s a bit harder to explain how this happens; leave a comment if you want the details.)

A bit sleepless and a touch ornery, about halfway through the chat, after realizing that the general tenor of the conversation was that we teachers need to have all sorts of strategies to engage the kids, I pounded in a couple of fast responses:

And a few seconds later:

Let’s just say that from the replies, my sense was that on the whole, we don’t look at this education thing (or this democracy thing, or this capitalism thing) as an “experiement” that may or may not be working. There was very little in the thread that ensued that suggested that our focus should be on iterating through the things that weren’t working instead of just trying harder to make them work.

“Learning is most engaging when we have a freedom to learn about whatever interests us.”

I’ve mentioned this before, but I really believe the key to understanding the challenges we face can be found in the student engagement question. The latest Gallup poll showed that only about 4 in 10 of our students (at least in the US) were engaged at the end of their K-12 experience. 4 in 10! Not sure about you, but to me, that’s a sign that something is seriously not working. And as much as we’d like to believe that we can increase the liklihood of children learning something they’re not intrinsically motivated to learn by working harder to engage or entertain them or to give them cool new technologies, the truth is we can’t. We may get some short term uptick in their interest, but the learning won’t stick.

You want engaged students? You need only answer this one simple question: what makes learning engaging to you? And once you answer that, which shouldn’t be that hard, make that happen in your schools and classrooms.

Maybe not, because the answer many (if not all of you) gave is not all that easy to do in classrooms: learning is most engaging when we have a freedom to learn about whatever interests us. That’s why we keep learning, and that’s why what we learn gets used. That’s not, however, the way it works for kids. Kids have to “do” the curriculum that we put in front of them. They have little freedom, and they find much of it drudgery because of that. (Just last night my son said “I hate having to write 300 words on a topic I totally don’t care about.” Go figure.)

You want to raise student engagement? Give students more agency over what they learn, when they learn it, and how they learn it. Not 100%. But how about 80%? (How about even 20%?) Now that would qualify as interesting iteration in a system that is not working on a learning level for too many of our kids at the moment. In the world in which we now live, with all the access we have to knowledge and tools and teachers, having disengaged students is not acceptable. It’s time to experiment.