It’s interesting to reflect on how often we hear or use the word dropout and yet barely give a second thought to its meaning or more importantly what it implies.

Along the way it has become a measure of school success or more notably school failure, and is used in a similar manner across higher ed.  In the US its use is akin to the use of free and reduced lunch statistics to give a snapshot of a school’s demographic, while a ‘dropout rate’ that exceeds 30% usually means there is immediate cause for concern…or worse, ‘outside’ intervention.

As much as we often try to euphemize with terms such as school completion rates, dropout is the term that has the ear of the mainstream media and the broader community. In their terms it simply a sign of failure, and its meaning has been extended to become a derogatory brand which unfortunately is then too often used as a label to describe a student’s whole character.

In fact it is now so much an accepted part of our language that we have a whole industry built around “dropout prevention.” Handy I’m sure, if you want to make a dollar after the fact, but interesting how much time we spend analysing why it is that some students simply don’t fit in with our existing models of school, rather than why our models of school don’t better serve the needs of so many students.

The most generous estimates suggest that our schools are not meeting the needs of between 1 in 3 and 1 in 4 of our students.  As our colleague Bill Ferriter highlights, that means 8,300 students drop out of American high schools every day. And we keep saying it’s their problem, not ours! 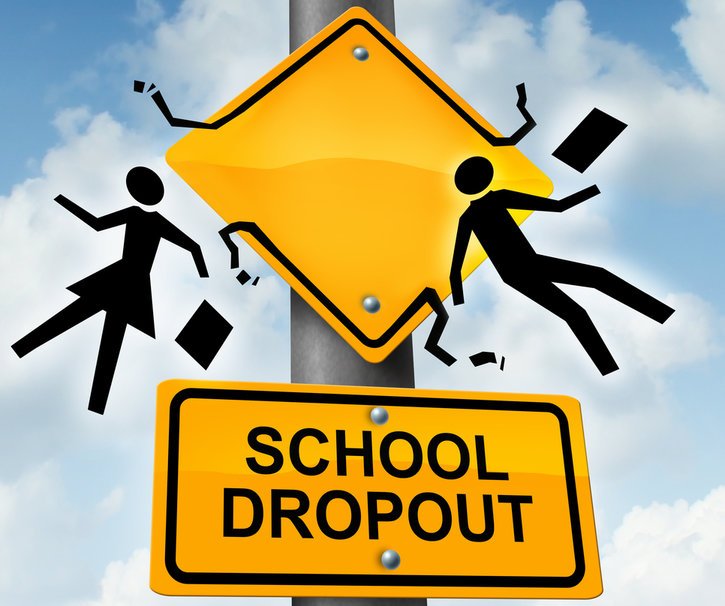 Maybe I am being a little harsh, but I’ve always believed the whole reason kids came to school was so they could leave as life-long learners. I know that historically there was also a serious content story, but somewhere along the way I reckon we might have just lost the plot a little. If we genuinely want them to be lifelong learners, then we better start by ensuring they love learning.

So does dropout mean these kids are dropping out of learning, or are we uncoupling school and learning in an effort to justify our failure to better identify their specific learning needs?  Or is dropout meant to identify a character flaw, a lack of resilience or ‘stickability’ which we find when things get a bit too tough? This of course, is always an easy explanation which once again has the benefit of assigning blame to the student, rather than the environment which is ultimately meant to be about developing them as being capable of learning well beyond the confines of formal school learning.

“The transformation of work requires much more than a mastery of a fixed curriculum inherited from past centuries. Success in the slowly changing worlds of past centuries came from being able to do well what you were taught to do.

Bit hard to do that if the reason you left school was because it had taught you that you were a failure at learning, isn’t it?

I really like the concept of Creative Confidence that IDEO founders Tom and David Kelley talk about in their recent book of the same name. The subtitle, “to unleash the creative potential in all of us” says it all, but doesn’t that just as easily apply to our potential for learning?

Shouldn’t our number one goal be to ensure that ALL students, not some, not 70 or 80%, but all, at the very minimum have a confidence in themselves as learners? Then when they do decide to leave formal schooling, whenever that is,  shouldn’t they first and foremost have confidence in their ability to learn whatever is required of them to be successful in their chosen careers, and in life?

I’m embarrassed by the somewhat elitist view that I too often see, that aligns learning success with academic achievement, and college or university entry. By doing so we marginalize so many of our kids who simply do not need to complete more formal higher education.

We seem almost addicted to the traditions of our formal models of learning, and consequently we now use it as the default measure of every child’s capacity as a learner. Forget the Jobs, Gates et al who were the exceptional higher ed ‘dropouts’ who proved the exception rather than the rule.  Instead think of how we might be able to structure more flexible, adaptable learning pathways for those students whose needs are not currently being met by the rigidity of our traditional school structures.

Those we lose today are just our canaries in the learning coalmine; a greater percentage of students could also be much better served but their learned compliance hides their dissent.

First and foremost, we must ensure all of our students stay curious, keep learning and can therefore create amazing opportunities as true lifelong learners because above everything else, they must always be confident in their capacity to learn.