A few days ago, while unpacking some boxes from our recent move, I came across a “book” of magazine articles that I’d assembled and copied for teachers at my school back in January, 1996. It was for a course titled “Basic Internet for Educators” that I had taught as part of a tech focused PD offering supporting a “five computers in every classroom” initiative we had started the year before. Think four-day workshop where the idea was to bring some aspect of the Internet into the classroom at the end.

It was even B.B…before blogs!

On the syllabus were things like Lycos, Gopher, Usenet, Netscape, FTP, Archie, and more now lost-into-the-ether terms and tools that back then were the basic building blocks of life online.

And while all of those things were in many ways more complex than that the tools we use today, I couldn’t help feel a real pull towards those simpler times as I leafed through the booklet and saw headlines like “Searching the World Wide Web” and “WAIS: The Internet Efficiency Expert.” Or “The Learning Revolution.”

There was such an innocence to the Internet back then. (For me, I’m sure some of this feeling is nurtured by the fact that my second “date” with my future (and current) wife consisted of the two of us dialing up AOL to go online for the very first time. So many connections…) 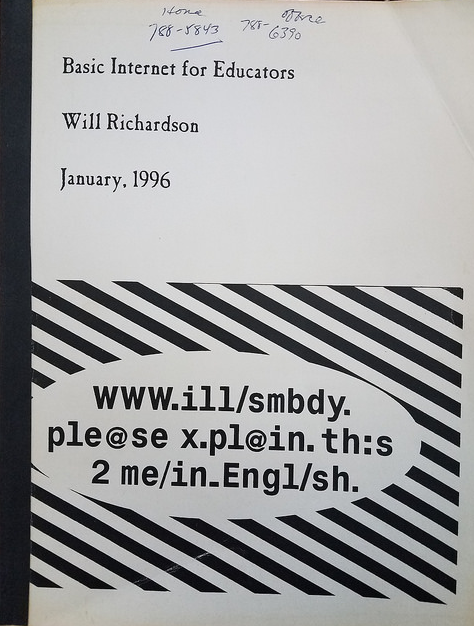 It was all exploration and figuring stuff out and finding cool websites that we could bookmark in our browser. And it was almost all consumption, unless you wanted to learn code.

Fast forward almost a quarter century and it’s getting harder to say the same. In fact, it feels like we’re entering a period of reckoning over what the Web has become. I’m not saying there still aren’t interesting people and ideas and tools that are a part of our Internet lives. But there’s little question any longer that we face huge problems online that arguably we’re not currently capable of fixing quickly. The politics of money and anger. Illiteracy. Hatred. Bias. Power. And more.

More and more of the Internet luminaries that were touting the potentials of the web 25 years ago are now speaking out in increasingly urgent terms that the Web is broken. And it’s feeling like that to me as well. I mean, my “Basic Internet for Educators” course today would be centered more around things like “fake news” and “privacy” and “net neutrality” and “Internet addiction” and “FAMGA,” among other things. It seems like what we need to know first and foremost these days is how to spot the abuse of access rather than how to amaze ourselves with it.

I still believe that the Web can still be a great place for connection and learning, but I’m less convinced that that will happen through Facebook or Twitter or other algorithmically driven sites that are programming our behaviors and beliefs in ways that subvert the potentials that we aspired to back in the Nineties. It may be time to turn all of that off and find community in other spaces.

And, it may be time to add more emphasis to the ways in which we use and teach about the Web in schools. The easy route is to say “I told you so” and advocate for less access not more. But that doesn’t help our kids who regardless the arc of the Internet are going to be using it throughout their personal and professional lives. It might be that one of our students will someday “fix” what ails the Web these days. But that will be less likely the more we run from these issues instead of addressing them straight on.

We can still decide what the Web becomes. For my own part, I’ve moved to Firefox Quantum, started using DuckDuckGo as my search tool, joined a couple of closed communities, spent some money supporting independent journalists and bloggers, and cut back my buying on Amazon and my time on Twitter, Facebook, and Instagram. That’s not much in the grand scheme, but it’s a start.

But you can only make a different, hopefully better choice if you know one exists. In schools, for both adults and kids, we have a long way to go in that regard.

2 thoughts on “What the Internet is Becoming”