Student Loan Debt: Is It Really a “Crisis”? Each week, Educating Modern Learners will pick one interesting current event – whether it’s news about education, technology, politics, business, science, or culture – and help put it in context for school leaders, explaining why the news matters and how it might affect teaching and learning (in the short or in the long run). We’re not always going to pick the biggest headline of the week to discuss; the application to education might not be immediately apparent. But hopefully we can provide a unique lens through which to look at news stories and to consider how our world is changing (and how schools need to change as well). This week (the week of June 23), Audrey Watters looks at a Brookings Institution report on student loan debt. 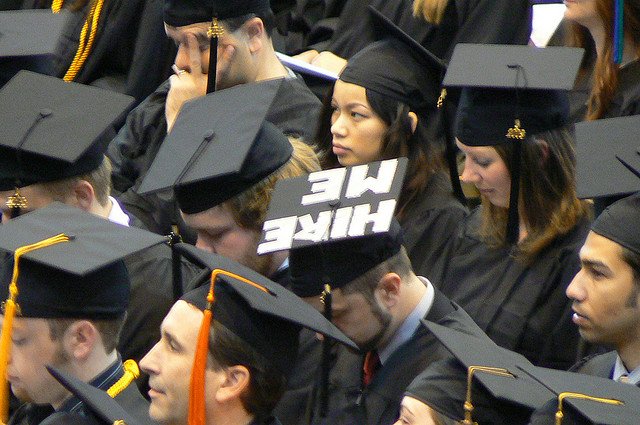 “The Reality of Student Debt Is Different From the Clichés” read the headline in The New York Times earlier this week (online and in print), arguing that the talk about a “crisis” in student loan debt is wrong.

The deeply indebted college graduate has become a stock character in the national conversation: the art history major with $50,000 in debt, the underemployed barista with $75,000, the struggling poet with $100,000.

The anecdotes have created the impression that such high levels of student debt are typical. But they’re not. They are outliers, and they’re warping our understanding of bigger economic problems.

The New York Times article draws on a new report from the Brookings Institution that argues that today’s borrowers are no worse off than borrowers were in the past. “The monthly payment burden faced by student loan borrowers has stayed about the same or even lessened over the past two decades.  The median borrower has consistently spent three to four percent of their monthly income on student loan payments since 1992, and the mean payment-to-income ratio has fallen significantly, from 15 to 7 percent.”

But the report and The New York Times’ prompted a backlash and then a backlash against the backlash. In the words of Vox’s Libby Nelson, “the small community of writers who like to argue over student debt went to war.” (She has a list of all the stories published on Tuesday here.)

The Awl’s Choire Sacca suggested that  “That Big Study About How the Student Debt Nightmare Is in Your Head? It’s Garbage.” Sacca argued that the Brookings Institution study had methodological flaws, prompting it to, for example, oversample from wealthy groups and to ignore those not making payments on their debt (because of forbearance or default perhaps).

Writing for The Quartz, Matt Phillips argues that it’s in the interest of the elite (which is maybe code for Awl readers; maybe not) to perpetuate this story about the student loan crisis.

But my hunch is that this has a lot to do with class. A vocal, college-educated group dominates the mediascape. (Sicha, for the record, didn’t go to college.) For many of them, student debt is the most formidable of first-world problems. (That’s probably too mean. There are plenty for whom student loan payments are a very big nut each month. I’m not trying to make light of that.)

But the truth is, if you managed to rack up giant student debt loads, that’s likely because you’ve undertaken—and finished—the kind of extensive education that enables you to earn a good salary over time. And while it’s a drag to have to pay your loans, it’s really not a problem for society at large.

But if you talk to people who study education policy for a living, they’ll tell you that the real victims of student debt aren’t English grads who took out a bit too much money to attend the University of Michigan or Oberlin. Those kinds of borrowers usually end up just fine. However, there is a huge contingent of working-class and minority students—some of whom are among the first of their families to attend college—who are getting chewed up by student debt. These are young people, and increasingly older adults, who might not have gone to college 20 or 30 years ago, but do now because the economy is brutal for job-seekers without a degree. They borrow for school, often to pay the inflated tuition at an unscrupulous for-profit institution or little-known vocational school, then frequently drop out. Suddenly, they find themselves in debt, with no degree and no guidance on how to manage their loans. They’re the reason almost 15 percent of borrowers default on their student loans after three years, and if anything, the media has underreacted to their plights.

So yes, student loan debt is a problem — although, to borrow some phrasing from William Gibson, it’s not distributed evenly. But it does have lifelong consequences not just in the short term as the Brookings Institution wants to highlight (and perhaps downplay) but in the long-run.