The US Supreme Court: Each week, Educating Modern Learners will pick one interesting current event – whether it’s news about education, technology, politics, business, science, or culture – and help put it in context for school leaders, explaining why the news matters and how it might affect teaching and learning (in the short or in the long run). We’re not always going to pick the biggest headline of the week to discuss; the application to education might not be immediately apparent. But hopefully we can provide a unique lens through which to look at news stories and to consider how our world is changing (and how schools need to change as well). This week (the week of April 21), Audrey Watters looks at the US Supreme Court’s decision in Schuette v Coalition to Defend Affirmative Action (as well as a peek at its deliberations in Aereo v ABC). 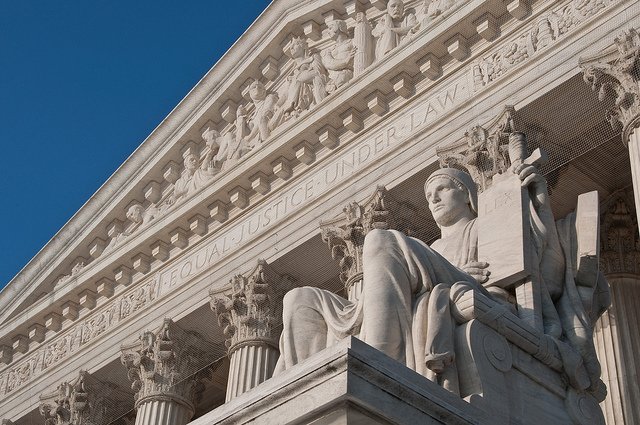 On Tuesday, the US Supreme Court upheld a Michigan constitutional amendment banning affirmative action in admissions to the state’s public universities. In a 6-2 decision (PDF), the Court reversed a lower court ruling that had set aside the voter-approved ballot measure.

Justice Anthony Kennedy delivered the decision, here explained by the “In Plain English” column on SCOTUSblog:

Despite the majority ruling to uphold the Michigan law, the justices displayed a range of views on the topic of race and affirmative action, offering 5 separate opinions on the case.

Justice Sonia Sotomayor wrote a blistering dissent (PDF) — 58 pages in length (longer than the 4 other opinions combined). She delivered it from the bench, an indication of just how fiercely she disagreed with the majority decision.

Sotomayor argued that the court “ought not sit back and wish away, rather than confront, the racial inequality that exists in our society. It is this view that works harm, by perpetuating the facile notion that what makes race matter is acknowledging the simple truth that race does matter.”

As The New York Times observed,

Justice Sotomayor recast the line. ‘The way to stop discrimination on the basis of race,’ she wrote, ‘is to speak openly and candidly on the subject of race, and to apply the Constitution with eyes open to the unfortunate effects of centuries of racial discrimination.’

How Will The Ruling Affect Schools?

As Sotomayor noted in her dissent, bans on race-based admissions decisions have already had an impact on university demographics. Since the Michigan law passed, for example, the number of African American and Latino students enrolled in the state’s public universities has fallen from 12.15% to 9.54% — a 25% drop. 10 other states have similar laws preventing race-based admission decisions, and they too have seen a decline in the enrollment in underrepresented minorities. The AP notes for example that “At California’s top public universities, African-Americans are a smaller share of incoming freshmen, while Latino enrollment is up slightly, but far below the state’s growth in the percentage of Latino high school graduate.”

With this week’s ruling, similar laws as Michigan’s, passed through similar ballot measures, will stay on the books. As the San Jose Mercury News suggests, for California “the only likely method for … opponents to get rid of the law would be a move to repeal it at the ballot box.”  More likely, some legal analysts have suggested, is that more states will now pursue similar anti-affirmative action initiatives.

The Supreme Court decision is the second one related to affirmative action in as many years. Last summer, it sent back to the lower courts a decision involving University of Texas admissions.

It’s worth noting: this year marks the sixtieth anniversary of the landmark Brown v Board of Education decision that declared illegal school segregation based on race. But as ProPublica has chronicled in its recently published examination of segregation in Tuscaloosa Alabama, many districts and schools in the US are growing once again more and more segregated.

Race matters, and as educator Jose Vilson writes, “our current segregated system moonwalks us back to a point where ‘separate and unequal’ wasn’t just de facto, but de jure. All of our students deserve better.”

Meanwhile, What Else Is the Supreme Court Deliberating?

The US Supreme Court is, of course, weighing other cases; and legal observers are watching closely the deliberations this week in Aereo v ABC. While this case does not address education issues, it does address technology matters.

The Boston-based startup Aereo offers video streaming services. Here’s one description of how its technology works: it “involves assigning a tiny antenna and a portion of disk space to each subscriber, which allows the subscriber to record and subsequently to view over an Internet connection, anything he/she has recorded from the over-the-air TV broadcasts.” The startup is being sued by the TV broadcasting industry for copyright infringement, for (this is their argument) publicly performing unlicensed material. Aereo argues that each “performance” is private — that is, it occurs on a per subscriber basis) and therefore does not infringe on copyright. The startup also contends that a ruling against it would dampen technological innovation.

If this sounds like a complicated legal argument about copyright and the TV business, you’re right. It’s also a case that is incredibly revealing about the lack of technical know-how among the Supreme Court Justices, fairly evident in their questions this week. (Harvard Law School student Sarah Jeong has a smart take on this, noting that none of the Justices and none lawyers in the court seemed to grasp the technological issues.)

Aereo v ABC also serves to highlight too how much our legal system, particularly with regards to copyright law, is struggling to keep up with changes brought about by the Internet. (So schools: at least you’re not alone in wrestling with the move towards an increasingly digital world.)