I had the great privilege of delivering a commencement speech at a small school in New Jersey last week. It was the first speech I can remember that I wrote and read verbatim. Thought I’d share it here for posterity and, hopefully, to spur some thinking. Please read it as if you were an eighth grader!

Members of the faculty, parents, honored guests, and most importantly, this year’s graduating class at CHPS, it’s my great honor to have the chance to speak to you today, and I sincerely thank you for extending the invitation.

I have to say that I’m a bit nervous. Even though I’ve given speeches in over 20 countries around the world, to audiences as big as 3,000, I’m a bit nervous today for this is my very first address to a graduating class of any type. I did give a speech to one graduate recently as my son Tucker, my “little boy” who grew to be a 6’ 5” basketball star thanks in part to spending countless hours practicing his shooting technique in this very gym where your ceremony is today. Tucker graduated from his high school yesterday. And the speech I gave him, with my arm around his shoulder, is similar in many ways to what I plan to say to you today, with a virtual arm on your shoulder. (Since that’s what people do when they give advice…)

So let me start with this statement, and it’s a bold statement. Some would call it “hyperbole,” a word that you will no doubt learn at some point in the next couple of years in preparation for the SAT (and for giving your own graduation speech.) (Anyone know what it means?) It’s a big statement, but I believe it. So here it is: You, young graduates, are living at the most amazing time ever to be a learner. As in the history of the Earth. As in EV-ER. IT IS AMAZING, and it’s pretty cool as well.

You live at the most amazing time to be a learner primarily because of one incredible invention that your parents and I did not have to learn with when we were your age. And that invention is, of course, the Internet. Now it occurs to me that many of you may not think of the Internet as such a big deal. After all, you haven’t known a world without it. But it is a very, very big deal in that it’s changed the way just about everything works these days. It doesn’t matter if you’re a businesswoman, a politician, an athlete, a musician…whatever. The world today is different for you because of it. And the world is going to be even more different tomorrow because of it as well. 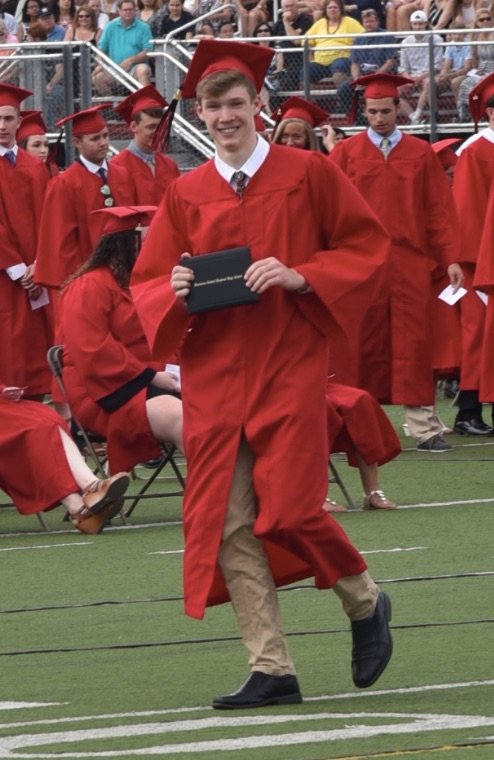 Now, if you’re graduating from CHPS, I’m guessing you’re wanting to see some evidence for this hyperbolic claim because, of course, that’s what well educated people demand. So as a way of getting to the evidence, let me ask you this…how many of you play or have played Minecraft? That’s what I thought. Do you know there are over 100 MILLION registered users out there, but some people think it’s more like 200 MILLION Players. That’s pretty crazy when you think of it.

But here’s the more important question: For those of you who play it, how did you learn to play Minecraft? I wonder if you know that when Minecraft was first released in 2009, it was released with NO INSTRUCTIONS. Zero. There was no manual. No “how-to” guide. No nothing. I’m guessing that those of you who play Minecraft or any other games learned to play it through a combination of hacking it out and, of course, YouTube. You know how many hits come up on a YouTube search for Minecraft? (Put that phone away…) Any guesses? 162 MILLION. That’s how Tucker learned Minecraft back when he was in seventh grade, by hoping on a Minecraft server with his friends and watching lots of YouTube videos, some of which were in languages that he’d never heard spoken before.

Now if it was me or the other old people who are in attendance today, we would have been pretty much lost without the instruction manual. I mean, imagine all you adults out there how quickly we could have learned how to change that muffler, or learned how to save the $20 and pierced our own ears, or learned the Hustle for the prom if we’d had YouTube (and if you caught that last one you’re really old.)

But you guys…there’s almost nothing you can’t learn on the internet. And that’s a hard truth for those of us who work in schools. And I want to be clear that schools are great places of learning, and you should take advantage of the opportunities that your next school provides. But here’s my most heartfelt piece of advice to you as you move on in your lives today: Whether it’s Minecraft or basketball or drones or Wonder Woman or the life cycle of the Naked Mole Rat, (and yes, there really is such a thing…Google it…not now!) be an amazing learner around whatever it is that you have a passion for, because you know what? You can be.

And here’s what else you can be if you’re an amazing learner: an amazing teacher. One of the reasons that the Internet is so powerful today is because, as many of you already know, it’s really easy to create things like pictures and video and stories and music and share it to the world or, maybe, just to your friends. I’m guessing many of you are already Snapchatting and Instagramming and other appy things that sound strange. (As long as you’re not doing those things right now, of course.) And I’m also guessing that some of you have created YouTube videos, maybe even about Minecraft, and shared what you learned so others could learn as well. Or maybe, as with some other eighth graders I know, you’ve published music to iTunes. Or, as with one 7 year old I know of, you’ve created a podcast about science that has thousands of people listening to every episode. Or maybe you’re like me and you have a blog!?! (And by the way, I’ve been blogging since before you were born…which, I know, is a really old person’s thing to say.) All of those things are ways to teach others what you’ve learned so they can be amazing learners as well.

So, here is the reality of your lives that is so different from that of your parents and most of your teachers. You have the biggest library ever assembled in your pockets. You have billions of potential teachers like all those people who made all those Minecraft videos. And you will have technologies to create and share things that we can’t even imagine yet. And on balance, I think that is a great thing. But please hear me say this, because this is really important. All that information and all those people and all those apps aren’t always a good thing. You have to LEARN to make sure you’re not believing stuff that isn’t true, or trusting people who shouldn’t be trusted. You have to learn to use technologies to create and share things that truly make the world a better place, not just fill it up with silliness.

And so I’m hoping that in your time here at CHPS you’ve learned to be discerning (another SAT word) or “smart” about all of that. Because if you’re not smart about the Internet, it can be a not so amazing thing. And remember, too, that there’s a whole bunch of learning to be done without technology. Sometimes we learn most powerfully by being disconnected from the Internet, outside in nature, or inside on basketball courts.

Now I know for some of you I’ve droned on long enough, so let me bring my talk to a close. The bottom line is this young graduates. If you are a smart, amazing learner, if you constantly want to learn more about yourselves, about the world, and about the other people you share it with, you will find great, great success in your lives. Now that we have the Internet, it’s almost a requirement to be constantly learning. And because it is also a requirement of every commencement speaker to weave in a quote a famous philosopher, I’ll remind you of the words of Eric Hoffer, who said, “In times of change (and we’re in a time of change right now…) In times of change learners will inherit the earth; while those who stop learning will find themselves beautifully equipped to deal with a world that no longer exists.”

So, as you graduate from CHPS remember: be curious. Keep asking lots of questions, no matter how silly they might seem. Go find interesting problems to solve, and then find interesting people to help you solve them. Create beautiful works of art and share them with the world. Keep mining your own Obsidian.

Because you live in the most amazing time ever to be a learner. So please, go forth and learn.

Thank you very much.