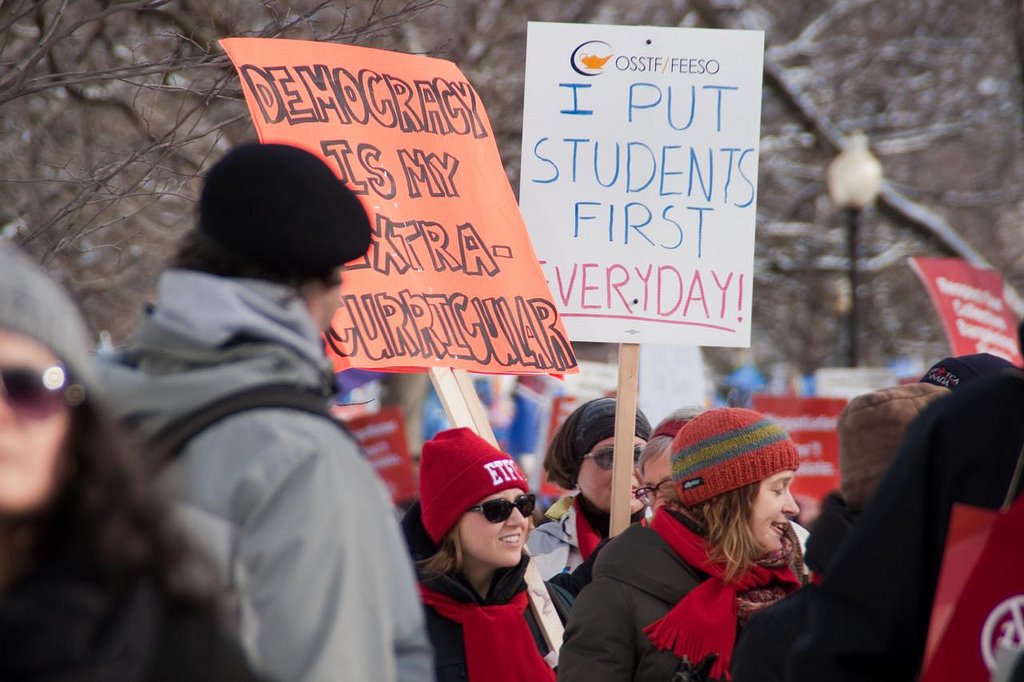 I liken our dominant educational structures as the offspring of a shotgun wedding between industrialists who needed literate workers to operate their machinery, and progressives who wanted to lift up the common person from poverty and drudgery. It wasn’t an easy marriage, and the children are a tad dysfunctional now. The union was never able to clearly identify the guiding principle of education, as I mentioned in my previous article: How Can Educators Prepare for the Networked Era? (1)

Our dominant work structures are also unsuitable for the demands of the network era, requiring thinking individuals with initiative, creativity, and passion. The currently popular business models of ‘social business’ and the ‘sharing economy’ are merely hollow shells without democracy. For instance,  is the employer/employee relationship the only way we can get work done? Self-governance not only works, it works better than command and control. Democracy is our best structure for political governance and it should be the basis of our workplaces as well. As work and learning become integrated in a networked society, there are great opportunities to create better employment models. We can do better than huge wage inequalities, generic work competencies, and dead-end jobs.

We need to undo our dominant  business models which are the legacy of military hierarchies because they are inefficient, ineffective, and stifle innovation. Not a single major business disaster in the last half-century can be blamed on too much democracy. However, many can be blamed on overly controlling management practices. Hierarchies are only as smart as the smartest gatekeepers. Networks are smarter than the sum of their nodes.

Business models that will allow connected leadership to prosper are essential in a network era. But democratic leadership depends on an educated and informed citizenry. While we may have easy access to information, we still need to continue with the education, especially social learning in peer networks. We need to learn how to change the rules of the game, because work is just a game, with man-made rules.

“For the vast majority of us who sell our labor in the marketplace, our economic insecurity and relative powerlessness impel us to play by the rules.” – Thomas Homer-Dixon

There is sufficient evidence to show that people can be exceptionally innovative under certain conditions. Working in a machine-like organization is not one of them. Organizing according to biological principles is our best path forward. We need to use organizations merely as a medium to connect individuals to their environment, not as an end in themselves, nor as a way to concentrate wealth. The role of every organization must be to improve its environment, as that is where it draws its sustenance. The only reason individuals should join any organization is because they share a common purpose. Hierarchies may be needed to get work done, but they have to be mutually agreed-upon and temporary. Organizations should be seen as temporary structures to improve the state of humanity. Anything less is rather primitive.

Working in a truly democratic fashion requires changes at all levels, from the law, to labor legislation, and especially for educational institutions. It also requires an aggressively engaged citizenry, which should be the focus of all our public institutions. As Thoreau said, “Disobedience is the true foundation of liberty. The obedient must be slaves.” The democratic workplace will be messy. But the alternative is worse. It is time to give up our mechanical systems and embrace a more complex way of interacting. There is no need for measured hours of work controlled by managers, only work for real value, as viewed by our fellow human beings.

Thinking for ourselves is the foundation of a new way of working. This requires an understanding of the whole environment in which we work. Artificial structures like jobs remove our ability to see the whole system. As we learn to think for ourselves, we must also connect with others. We are only as smart as our knowledge networks. But we do not need someone to manage our connections. The simple guideline of self-direction, often enabled by network technologies, can create beautifully complex relationships amongst interconnected people. This is already happening outside the organization. We need to bring it inside. For the first time, we have the technology for democracy at work. The writer, Gwynne Dyer, has observed that, “Tyranny was the solution to what was essentially a communications problem”. This problem no longer exists.

Educators need to ask if the traditional teacher/student relationship is the only way learning can happen and whether a standardized curriculum constrains education (2). A functioning democracy needs an electorate that is engages in the political process, but first they must understand it. Learning by doing, in a democratic education system should be the foundation for any democracy. A democratic school is possible. Ricardo Semler, founder of Semco, one of the most democratic companies in the world, is also creating a democratic school system, called Lumiar (3).

“Lumiar says the following: Let’s divide this role of the teacher into two. One guy, we’ll call a tutor. A tutor, in the old sense of the Greek “paideia”: Look after the kid. What’s happening at home, what’s their moment in life, etc.. But please don’t teach, because the little you know compared to Google, we don’t want to know. Keep that to yourself. Now, we’ll bring in people who have two things: passion and expertise, and it could be their profession or not. And we use the senior citizens, who are 25 percent of the population with wisdom that nobody wants anymore. So we bring them to school and we say, teach these kids whatever you really believe in. So we have violinists teaching math. We have all kinds of things where we say, don’t worry about the course material anymore. We have approximately 10 great threads that go from 2 to 17. Things like, how do we measure ourselves as humans? So there’s a place for math and physics and all that there. How do we express ourselves? So there’s a place for music and literature, etc., but also for grammar.”

As a society, we have not yet been able to effectively integrate democracy and business. But at least our current education systems, while flawed, have some democratic oversight. In a networked world, our society needs to be more democratic, not less. Just as some business leaders are beginning to realize the potential of democracy in the enterprise, now is not the time to remove democracy from education. There is little hope for democratic business if education becomes a business. For our future to remain democratic, both education and business need to be based on its fundamental principles. We are at a crossroads.

The principles of a democratic workplace are simple. It is only through innovative and contextual methods, the self-selection of the most appropriate tools and work conditions, and willing cooperation, that complex problems can be addressed. This requires creative human solutions fuelled by passion, creativity, and initiative. The duty of being transparent and sharing our knowledge rests with all workers. These principles begin at school.

“The book, Democracy in America, is, I think, the most useful book I know to help understand who we are. And he says, if I can summarize him in a rather gross form, that he came here and he found a society whose definitions and solutions were not created by nobility, by professionals, by experts or managers, but by what he identified as little groups of people, self-appointed, common men and women who came together and took three powers: the power to decide there was a problem, the power to decide how to solve the problem – that is, the expert’s power – and then the power to solve the problem. These little groups of people weren’t elected and they weren’t appointed and they were everyplace, and they were, he said, the heart of the new society – they were the American community as distinct from the European community. And he named these little groups ‘associations’ . Association is the collective for citizens, an association of citizens. And so we think of our community as being the social space in which citizens in association do the work of problem-solving, celebration, consolation, and creation – that community, that space, in contrast to the space of the system with the box at the top and lots of little boxes at the bottom. And I think it is still the case that the hope for our time is in those associations.”

Helping students make better connections, between themselves and their society, should be the focus of education. Democracy is about being connected to each other. Democracy makes work more human. Democracy at school prepares the young citizenry for the task of maintaining a democratic society. What could be more important?