That from an article on what I consider to be the oh so awful wonders of tablet technology and more in a school as reported by the Houston Chronicle. A sentence that in many ways captures the problem with technology integration in schools around the world.

In this particular Houston area school, learning is being gamified. Students get points for right answers, and they get more points for getting the right answers first. Learning is a competition. And of course the kids love it, because it’s making the exceeding dull learning of the traditional curriculum “new.” Oh, and then there’s this:

Another technological tool that has changed Johnson’s teaching style is the Samsung All-Share Cast, which provides wireless streaming of content from a device to a big screen. “As I move around the classroom, I can project from my tablet,” Johnson said. “That was something I really wanted. I didn’t want to stand in front of a classroom tied to a whiteboard and I didn’t want to be tied to a tablet.” Now, the teacher is no longer tethered to one spot.

As if she ever was.

Welcome to the low hanging-fruit of edtech, where we embrace any technology that brightens up kids’ eyes and makes disengagement go away, even for the short term. And in our never ending (“Keep it new!”) chase to find new apps and devices to get kids to stop thinking about the stuff that they really want to do and learn, we’re training them to be even more dependent, more compliant, more inside the box that we build for them. 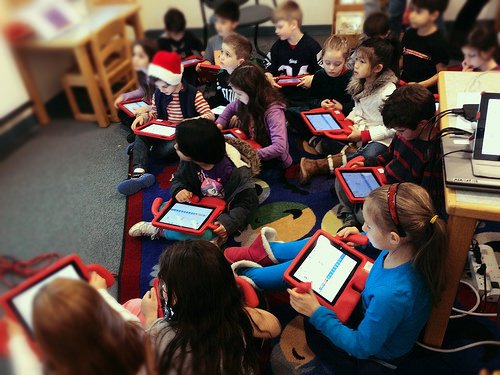 I take with a very large grain of salt anyone who talks about transformation through technology these days, because as with much of the language we use to describe what we do in education, that “T” word has been co-opted by vendors and lawmakers to mean almost anything that you can purchase enough of for every classroom or every student as long as it’s been proven to raise student achievement or engagement. By diminishing the “T” word to the tangible, those folks reap not only the monetary rewards of the goods they peddle, but also the political rewards of being able to “measure” the outcome. I mean what would happen if technology became more than just about “changing the way I deliver the content?”

In a brilliant essay titled Against School by the late Aaron Schwartz that’s just being published in a new book about his life, he writes:

Now it’s reasonable to believe that all of these things have flaws—that schools, for example, could do a better job of teaching students. After all, things can always be improved, sometimes quite a lot. But when you go further and say that schools are not only bad at teaching people, but that they’re not about teaching people at all—well, that’s when things get scary.  Because if schools aren’t about teaching people, that means everything we’ve been told about them is a lie. And if everybody is lying to us, then, well, that does start to sound like a conspiracy theory.

Read the whole essay, which is a pretty savage indictment about what we’ve created, most of which I think he argues pretty well. When you look at the ways in which we have “integrated” technology into the teaching profession, I think it’s quite obvious that it’s really not about teaching kids to learn. It’s about teaching them our stuff with glitzy new tools that will hold our kids’ attention for something longer than a textbook.

Yet teaching kids to learn is the coin of the realm. And using technology can be an integral part of that, though it’s not a requirement. Because with technology or not, teaching kids to learn first requires shifting agency and power over the learning to the learner (the intangible.) It’s not about content delivery. It’s not about the teacher being able to “teach” from all parts of the room. It’s about kids choosing what to learn and how to learn it, and then experiencing the joys and suffering the pains of doing that. But that’s where engagement comes from. Not from points for getting the right answer. But from truly caring about the experience.

This all has been on  my mind a lot lately, primarily because of two quotes I read recently. The first, is by Seymour Papert, who wrote:

I love that juxtaposition so much, and it’s powerfully true. And in that is the recognition that to do well at things not taught, you need to be an engaged, passionate learner. How many of those kids in that Houston classroom are developing the dispositions and skills to learn on their own, I wonder? My guess is very few. Imagine the difference.

And that leads me to the second quote, a very simple one that is shared by Teemu Leinonen, a Finnish educator who was a part of a visioning team for his country’s path forward regarding education. Here’s the vision they came up with:

A country where everyone loves learning.

Um, yeah. That gets it. Imagine if that was the vision for every country, every school, every classroom. What a different world that would be.

I know that it looks like those children in that Houston classroom are loving learning. But what happens when they’re asked to organize their own learning with their own technologies? How much will our very simple uses of edtech help them at that point?

1 thought on “EdTech vs. EdLearning”