The future of work for our children can pretty much be summed up as follows: If they’re only ready to do work that is grounded in routine tasks, regardless of  whether or not those routines are physical or intellectual, they’re probably not going to have a lot of work to do in the future. And even if the work they do is non-routine yet based primarily in manual labor, their prospects may be fading as well.

That’s the stark assessment by an increasing number of analysts who are trying to decipher the impact of computers and other technologies on the jobs that we do. And if you spend enough time reading these predictions, (and I do,) you get the sense that the changes we’re about to see in the workforce are coming at us with more speed and with more scale than most people realize. And I can tell you for certain, the speed and scale are going to shock those in education charged with preparing our children for it.

While this issue of the newsletter offers up a number of interesting links that discuss a wide swath of thinking when it comes to work over the next decade or so, no overview has stuck with me more than a piece in Medium by Scott Santens titled Deep Learning Is Going to Teach Us All the Lesson of Our Lives: Jobs Are For Machines. No doubt, it’s a bit of a click-bait-y title that has gotten the piece tens of thousands of reads (and 1,400 likes as of this writing.)  But it’s a thoughtful, sobering overview not just of what’s to come but of what is already here. Like so many other things that we think of in the future tense, (climate change, surveillance, etc.) the changes in work have already arrived, we just don’t seem to realize it.

‘Any time now.’ That’s the new go-to response in the 21st century for any question involving something new machines can do better than humans, and we need to try to wrap our heads around it. We need to recognize what it means for exponential technological change to be entering the labor market space for nonroutine jobs for the first time ever. Machines that can learn mean nothing humans do as a job is uniquely safe anymore. From hamburgers to healthcare, machines can be created to successfully perform such tasks with no need or less need for humans, and at lower costs than humans. 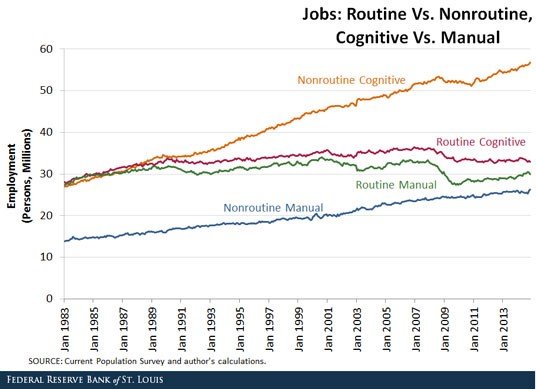 Seriously, the whole post is worth a read, with the required touch of skepticism. It’s a cogent, well articulated argument for why we need to start thinking differently about what it means to be “career ready” (as well as, I suppose, “college ready.”)

So, what does this mean for educators and schools? I’m thinking of a number of questions that this week’s newsletter should raise:

1. Is the current emphasis on content and curriculum really relevant to our kids’ prospects for success any longer? I mean let’s be honest; why should our students be “learning” math to the extent to which they are when machines are going to do (or are already doing) 98% of the math that needs to be done in the world? The idea that every kid needs calculus is just absurd, as is much of the other stuff that we expect kids to “learn” in school. And at what expense? To quote on of my new favorite influencers Russell Ackoff, “Why should children—or adults, for that matter—be asked to do something computers and related equipment can do much better than they can? Why doesn’t education focus on what humans can do better than the machines and instruments they create?”

2. Are we discussing these changes with our students? I’ve developed a fondness for posting things on Twitter and then asking (if I have enough characters left) “We talking abt this w/kids?” Some days, after reading the latest news on climate or terrorism or nuclear weapon tests, I feel like Tweet-asking “We giving kids therapy abt this?” This morning, after the bombings in Brussels, I asked my son if anything in the news is ever discussed in class. He just shook his head.

3. What does this mean for the role of a teacher? It’s easy to say that the “human connection” will always be paramount when it comes to learning, and I don’t disagree. But here’s the deal with that: if the value of the teacher is to help a student get a great SAT or PARCC or NAPLAN score, then there’s a compelling argument building that machines will be able to do that better through adaptive software that “personalizes” the curriculum for each student in ways that teachers just can’t. So, wouldn’t we be better off shifting the emphasis on the work of our teachers away from content and grades and curriculum to mentoring, apprenticeships, making, and discussion?

Like so many other things that we think of in the future tense, (climate change, surveillance, etc.) the changes in work have already arrived, we just don’t seem to realize it.

4. Finally, what role does leadership play in staying abreast of these types of shifts, articulating them to school and community, and in building capacity for those groups to engage in relevant, meaningful conversations around what changes may need to happen? Obviously, my answer is that leaders better be building school cultures that learn, constantly. Cultures that are not only informed but which are willing to embrace the complexities that come with change and make sense of it for the betterment of their students. I’m thinking here of the potential of PLCs, which many schools are using but which, at least in my experience, have not lived up to their potential in terms of ongoing, relevant, learning.

I’m sure there are many other questions to debate and think about. But there is (once again) an urgency to this that is increasingly obvious when we look at the current work of schools. If cognitive, non-routine work is the future for our kids, why is so much of our work in schools routine? Why the same lessons and the same assessments and the same pedagogies year after year after year? If we are serious about preparing our kids for the “anything” of the future, and I’m not sure that we are, we need to drastically begin to rethink our own work right now.