Let’s start here: my “baby” will be graduating high school in about six months. It’s absolutely flown by, and here I am, like most parents, awestruck at how quickly it went.

Good news: she’s a pretty awesome human, and there’s a lot to love. Also good news but in some ways unsettling news: her path after graduation is not “traditional,” at least given the upper middle class community in which we live. There have been no college visits. No applications and essays. No waiting for the mail to come. She’s charting her own path, following a passion and an opportunity which makes me a mix of excited, scared, happy, worried, and more. It would be so much easier just to “send her off to college.” I’ve got that playbook down. But no…

So I’ve been thinking about what she’s “learned” in her 13 years of schooling that’s prepared her for what’s to come, and I’m struggling. Content-wise, she’s literate…always a good thing. I’m sure she knows a fair amount of science and history, though she never talks about it. She got an “A” in pre-calc, so I know she’s got enough math skills to get her by, right? She’s got some grounding in art and technology and various other “electives.” I’m not sure, however, that much of it is going to stick long term. And she’s already talking about a bonfire of the notebooks on graduation day. Unfortunately for her, I guess, her classroom experiences have not stoked a more useful fire for learning very much at all. 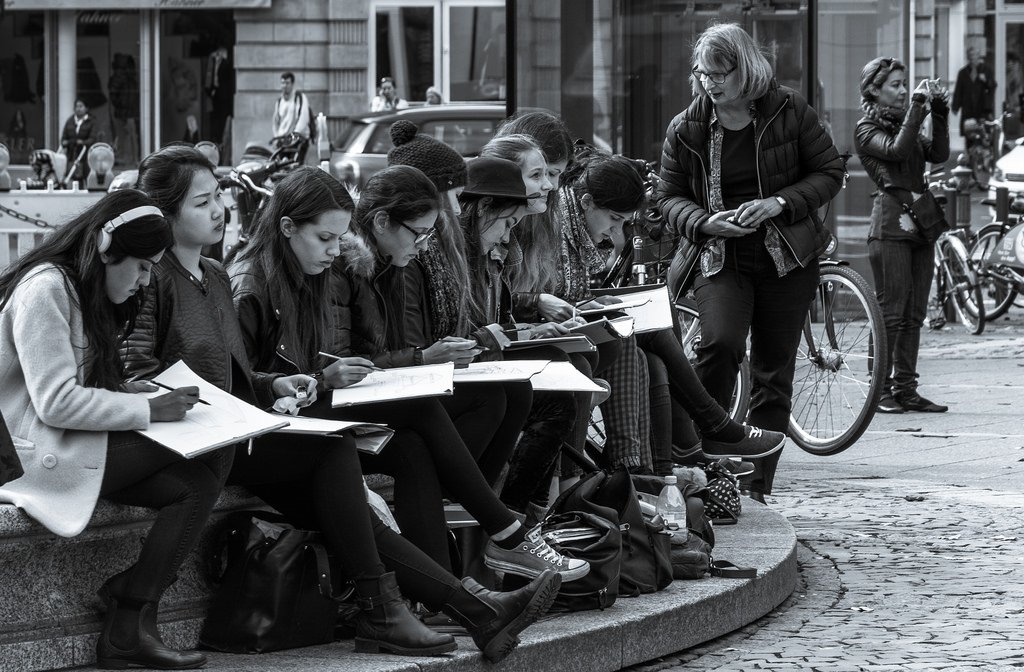 That’s not to say she hasn’t learned a lot in her 17+ years. She’s learned to keep eight ever-refilling tables of customers happy during a marathon shift at the Grill Shack. She’s learned to drive, pretty well I would say (although she does have a penchant for tailgating.) She’s learned to eat really healthfully and knows what it takes to keep herself fit. She’s learning how (and sometimes struggling with) leading the basketball team as one of the co-captains this year. She’s learned how to take the train into New York City and navigate Manhattan like a pro on her own. She’s learned to love her little brother. All of these things, (aside from the last one,) she’s been highly motivated to learn pretty much on her own, and thank goodness she has. More than what she “learned” in school, all that stuff that’s on her very impressive transcripts, these are the things that I think are going to serve her really well in her life moving forward.

It’s against that backdrop that I’ve been reading (and re-reading) a series of posts by Dave Cormier (1,2), Stephen Downes, Michael Feldstein, and Karl Fisch. (This is one of the things I love most about the Web, by the way, when smart people reflect deeply on important topics and share that thinking online.) Oh, and there’s another context; I just sent off a manuscript for my next bite-sized-book, tentatively titled Teacher as Learner First, which is to say that learning has been on my mind a great deal of late.

So when Dave starts off his post on “Learning’s first principle” with “none of this matters if they don’t give a shit,” I can’t help but go “Yeah. Absolutely right.”

But it doesn’t take Dave too long to say something that makes me bristle, thinking about Tess and all:

Our job, as educators, is to convince students who don’t care to start caring, and to encourage those who currently care, to continue caring.

Our job, as educators, is to create the conditions under which our students can learn productively.

I respectfully disagree, (which is not something I do with Dave very often.) In fact, I don’t think it’s even possible to convince kids (or anyone) to care about “our stuff” (read curriculum) if they see no reason to care about it in their own lives. We may play a role in helping kids see connections between “our stuff” to their lives, but, unfortunately, the vast majority of “our stuff” is un-connectable to begin with, if that’s a word. Dave alludes to this when he says in a follow up post:

Give me a kid who’s forgotten 95% of the content they were measured on during K-12 and I will match that with almost every adult I know.

And when he says this:

The problem is that we have built an education system with checks and balances, trying to make it accountable and progressive (in some cases), but we are building it without knowing why. We have not built an education system that encourages people to be engaged. The system is not designed to do it. It’s designed to get people to a ‘standard of knowing.’ Knowing a thing, in the sense of being able to repeat it back or demonstrate it, has no direct relationship to ‘engagement’.

I think it’s arguable that “knowing a thing” has a direct relationship to “engagement” only when that “thing” is required to create something or solve a problem that someone care about. But schools’ biggest problem is that it systemically fails to connect what it thinks students need to know to much of anything that those students care about in the first place. And so I’m not sure at the end of the day that we should measure our success as educators by our ability to “convince” students to start caring when so much of what we put in front of them doesn’t matter to them.

And so what happens to all of Tess’s friends who are off to college next fall? Let’s here from university professor Dave again:

The vast majority of students coming to most universities are not prepared to be engaged in learning. It’s that simple. It crosses socio-economic barriers. It crosses cultural differences. We are not bringing up a generation of children who are ENGAGED in learning by default. That engagement is an exception.

And we’re surprised by this why?

But here’s the kicker. Not a person reading this DOESN’T KNOW what it takes to be an engaged learner. If you’ve read this far, you’ve done so because you want to learn more about learning or schooling or reform or whatever. But I doubt anyone has “assigned” this reading to you.

Sarason is brilliant in a lot of ways, but this is not rocket science. We learn when we give a shit. We don’t when we don’t.

So let me revise Dave’s thesis above: “Our job, as educators, is to create the conditions under which our students can learn productively.” Or, as Stephen Downes put it, “I see education less as an enterprise in making people do what they don’t want to do, and more as one of helping people do what they want to do.” Because at the end of the day, if that’s not what education is about, then education doesn’t happen.