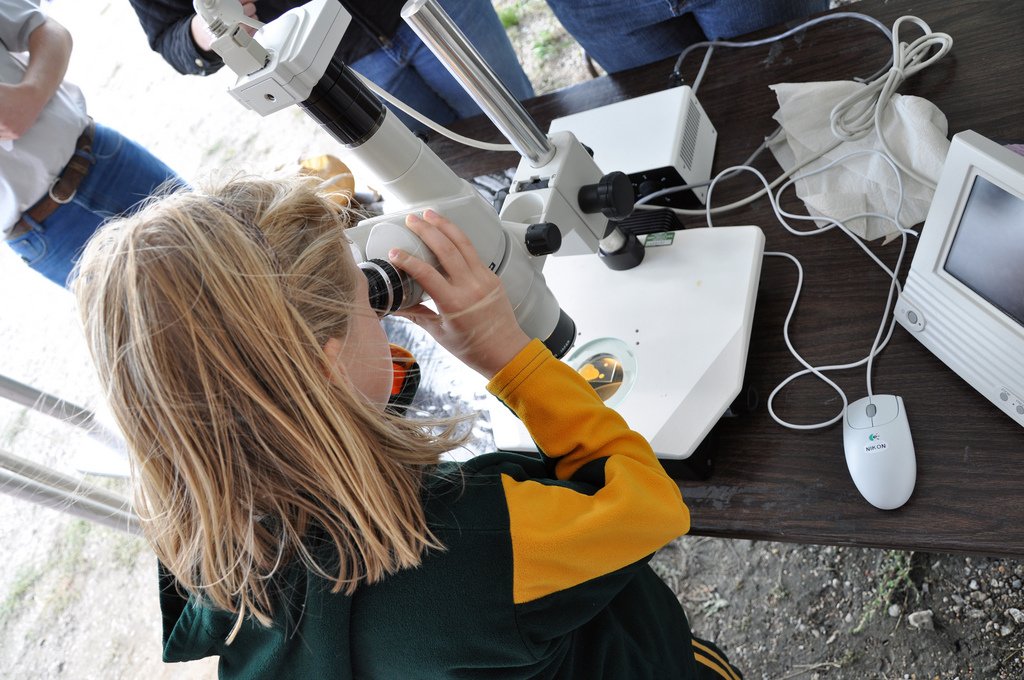 It’s a well-known fact that there are far fewer women in science and technology careers than men. Just 12 percent of those earning computer science degrees are women. And tech giants such as Google, Facebook, and Apple have admitted that only one-fifth of their technical employees are female. Conventional wisdom was once that women are just not as interested in technical fields as men. Now, the more current understanding is that a gender bias exists at the university and professional levels that prevents many women from pursuing and staying in these careers.

However, the latest research shows that the bias reaches back much farther—discouraging girls from science, technology, engineering, and math (STEM) subjects as early as elementary school.

In the math test graded by teachers who could not view the students’ names, the girls outscored the boys. However, in the test graded by teachers who could see female and male names written on the tests, the boys outscored the girls. The effect was not the same for tests in other subjects, such as English and Hebrew. According to the New York Times’ article on the study, the researchers concluded that “in math and science, the teachers overestimated the boys’ abilities and underestimated the girls’, and that this had long-term effects on students’ attitudes toward the subjects.”

The difference for these students was encouragement given by teachers at the elementary school level.

For example, when students from the study reached junior high and high school, the researchers inspected their scores on national exams. The boys who had been encouraged when they were younger performed significantly better. Researchers also looked at the advanced math and science courses that students chose to take in high school. After controlling for other factors that might impact their decisions, they found that the girls who had been discouraged by their elementary school teachers were much less likely than the boys to take advanced courses.

The researchers also found that discouragement from teachers in math or science wound up lowering students’ confidence in other subjects, showing again how important a vote of confidence from a teacher can be to a child’s education.

In fact, discouragement or encouragement from a teacher can make a difference at any age. Tammy Martin is a special education teacher at the Goddard Elementary School of Science and Technology in Worcester, Massachusetts. When she and a colleague were co-teaching at the high school level, they divided up the courses and Martin requested not to teach math, stating that it was not her strongest subject. Her colleague’s response: “Of course not, you’re a girl.”

Martin decided to conquer her fear of math and took a course with a well-known professor. As he walked around asking each student why they were taking the class, Martin responded, “I was never good at math. Just couldn’t do it.” He told her, “You need to drop that belief. You can be good.” Martin says he taught in a way that made sense to her, using many visuals. She says she finally “got” math in a way that she hadn’t since elementary school.

Girls who had been discouraged by their elementary school teachers were much less likely than the boys to take advanced courses.

So what can teachers do to help level the playing field? Marti Beeck was a primary school teacher at Olson Elementary in Marina, California for 13 years. She now develops math curriculum as an associate editor at Evan-Moor Educational Publishers. Beeck says, “As a teacher, you are presented with many children and many different learning goals. You do whatever you can to make it relevant. The magic is in finding their natural interests.” Beeck says she found no difference in interest levels or proficiency between boys and girls in her classes.

But before teachers look to develop differentiated instruction for their students, they should examine their own ingrained biases. According to an article in Time, decades of research conducted on teacher biases have revealed startling ways in which gender stereotypes have governed classroom dynamics:

“[Researchers] found that teachers spend up to two thirds of their time talking to male students; they also are more likely to interrupt girls but allow boys to talk over them. Teachers also tend to acknowledge girls but praise and encourage boys. They spend more time prompting boys to seek deeper answers while rewarding girls for being quiet. Boys are also more frequently called to the front of the class for demonstrations. When teachers ask questions, they direct their gaze towards boys more often, especially when the questions are open-ended. Biases such as these are at the root of why the United States has one of the world’s largest gender gaps in math and science performance. Until they view their videotaped interactions, teachers believe they are being balanced in their exchanges.”

Yet teachers alone cannot be held responsible for the disparities in STEM achievement between boys and girls. As far back as early childhood, children are sent to a pink or a blue aisle in the toy store. Boys are often given cars and LEGO sets, while girls receive dolls and magical ponies. Many toy-makers are looking to rectify gender differences by creating engineering models for girls, but they are still building castles with pink blocks.

There are plenty who argue that this is just the way children are wired. Boys naturally gravitate toward the trucks and chemistry sets, while girls are born with a princess gene. According to neuroscience professor Lisa Eliot, Ph.D., in her book Pink Brain, Blue Brain, genetics and hormones do seem to have an influence on why boys and girls choose different toys. Eliot cites a study in which researchers tested 1-year-old monkeys for their interest in human toys. The boy monkeys spent more time playing with a ball and toy police car, while the girl monkeys preferred the rag doll and red cooking pot. This research supports the argument from some scientists that boys prefer things that move while girls are more attracted to things that have faces or social qualities.

Still, the human brain is pliable. Even if it’s true that boys are girls instinctually gravitate toward certain playthings, parents can have a huge influence on their child’s toy selection. In an article for Toca Boca magazine, Dr. Elaine Blakemore, an expert on children’s gender development, says, “Even with infants, parents are subtly more positive to kids who pick up gender-typical toys.” Blakemore says that a simple smile, or lack of one, can signal to young children whether or not they are picking up an “acceptable” toy.

Even parents’ technology choices for their kids can help create gender bias. According to a recent survey by PlayScience, parents are more protective of girls when it comes to the devices they use. Thirty percent of parents allowed girls to use devices based on how “child-friendly” they were, compared to only 17 percent for boys. Parents were also more likely to let boys choose the device they’d like to use. In addition, parents were three times more likely to allow boys to play video games and use smartphones than girls.

Parents may not understand how their selection of gender-specific playthings impacts their child’s long-term education. They may not see how some of their subconscious actions can discourage STEM skills in early childhood development. Teachers might not realize that they call on the boys more than the girls in math class. They may not recognize the damage they are doing when they brush off Susie’s struggles in science, because deep down they believe she’s not supposed to achieve in that subject area anyway.

But if parents and teachers stop and reflect on the research, they can begin to understand that the reason for gender disparities in the science and technology fields is not necessarily because of an inherent disinterest from women—it’s because of systematic discrimination brought on by deeply ingrained societal prejudices. It’s time for parents and teachers to examine their own actions and see what they can do to help bring about a change.

Not every student is going to want to move forward in a STEM career. But at least they won’t be deterred from doing so just because they are a girl.

How are you evaluating the ways in which teachers respond to girls vs. boys when engaged in STEM related activities?

What STEM-related opportunities do you offer and promote specifically for girls?

How do you discuss gender bias generally with your staff, parents, and community?