Two recent news articles from different parts of the world should have us thinking hard about the future of the teaching profession.

First, from Australia, a report that there has been a 12% fall in applications to study teaching at that country’s universities this year. Greg Craven, the vice-chancellor at Australian Catholic University says, not surprisingly, “I’m deeply concerned about the decline in enrollments.”

And from the U.S., a story from NPR’s Eric Westervelt starts simply with this: “This is the canary in the coal mine.” Over the last five years, California has seen a…wait for it…53% drop in teacher training programs. North Carolina is down 20%, and according to the story, New York and Texas are down significantly as well.

This all squares with a conversation I had last year at a major university in Indiana where a professor told me that teacher pre-service applications were down by one-third, forcing layoffs and cutbacks in the department.

So what’s going on here?

While the causes in the two countries do differ a bit, the bottom line is all too simlar: people are losing respect for the profession. In Australia, the education minister has been on the attack on teacher quality, citing instances of poor literacy and numeracy among the current crop of young teachers. In the U.S., teachers have seen all sorts of changes in the past decade that have simply eroded the appeal of the job. As the NPR article states:

There’s a growing sense…that K-12 teachers simply have less control over their professional lives in an increasingly bitter, politicized environment. The list of potential headaches for new teachers is long, starting with the ongoing, ideological fisticuffs over the Common Core State Standards, high-stakes testing and efforts to link test results to teacher evaluations. Throw in the erosion of tenure protections and a variety of recession-induced budget cuts, and you’ve got the makings of a crisis.  The job also has a PR problem…with teachers too often turned into scapegoats by politicians, policymakers, foundations and the media.

(Check out the over 1,200 comments on that article if you really want to get a sense of how depressing an environment schools have become for many teachers.)

But in what may be the worst part of all, m 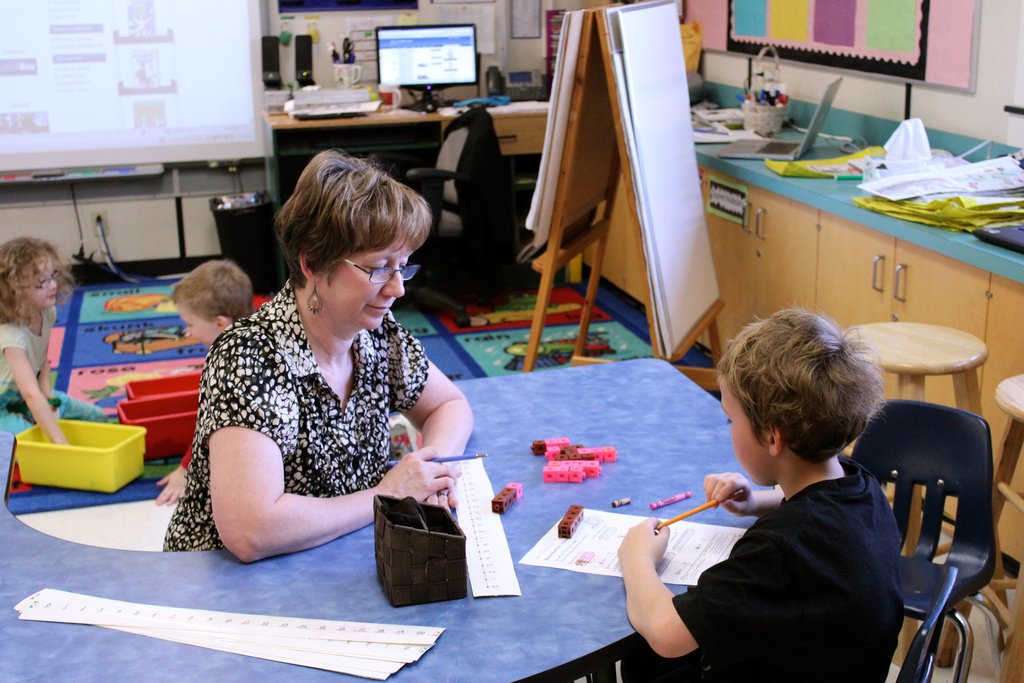 any in the education reform camps are actually happy that the canary has reason to sing. And this is especially true of those who see technology as the fix, a way to replace all those mediocre teachers out there with a handful of experts or, better yet, get rid of them all together by providing personalized, adaptive computer instruction to lead them through the curriculum and to “higher student achievement” (read: better test scores.) Here are a couple of tastes as to what that looks like.

“Disruptive innovation” author Michael Horn (who, for the record, has never taught) writing in Forbes a couple of weeks ago said:

Although we know that online learning is disrupting the traditional K–12 model of learning, what’s interesting about this new paper is the evidence that online learning is also disrupting the systems that place teachers within this traditional model. More specifically, online learning provides a new, more flexible and more productive way to match teachers with students, and this alternative approach already exhibits some of the same indicators as other disruptive innovations. As Sajan George has also observed, disrupting classrooms is key to transforming our school system by eliminating the need for all 3.5 million teachers to be superheroes, which is a preposterous starting point for education reform.

The straw man in Horn’s argument is this: teachers only need to be superheroes if you double down on trying to make the traditional school narrative work in the modern world. (Also, someone should probably point out to him that there is no STEM crisis in the US as he suggests in the article.) As we contstantly point out here, “old school” thinking about curriculum and assessments and pedagogy is becoming increasingly difficult to sustain. That content and curriculum are not the coin of the realm any longer doesn’t fit very neatly into Horn’s argument. Yet he needs them to be, because as long as content is king, technology can definitely be an effective, maybe even more effective teacher.

Here’s a clear example of that thinking that I’ve trotted out many times, from Yale professor David Gelertner. Apologies for the extended snip on his “Friendly, Neighborhood Internet School,” but I think it makes the point:

A one-classroom school, with 20 or so children of all ages between 6th and 12th grade, each sitting at a computer and wearing headsets. They all come from nearby. A one-room Internet school might serve a few blocks in a suburb, or a single urban apartment building.

In front sits any reliable adult whom the neighbors vouch for—often, no doubt, some student’s father or mother, taking his turn. He leads the Pledge of Allegiance, announces regular short recesses to clear everyone’s head, proclaims lunchtime. He hands out batteries and Band-Aids and sends sick children home or to a doctor. He reloads the printers and futzes with malfunctioning scanners, no doubt making any problem worse. But these machines are cheap, and each classroom can deploy several.

Each child does a whole curriculum’s worth of learning online, at the computer. Most of the time he follows canned courses on-screen. But for an hour every day, he deals directly, one-to-one over phone or videophone with a tutor. Ideally there’s a teaching assistant on an open phone line throughout the day, each assistant dealing with a few dozen students. In early years, parents will need to help here too. And each child needs a mentor who advises parents on courses and keeps track of the student’s progress. The wealthy conservative foundation, think tank or consortium that spends liberally to get this idea off the ground will probably provide mentors, in early years, from its own staff.

The online courses—some exist already but not enough—are produced by teaching maestros. As these new schools gather momentum, they will make use, as tutors or assistants, of the huge number of people who are willing and able to help children in some topic for a few hours a week but can’t or won’t teach full time: college and graduate students and retirees, lawyers, accountants, housewives, professors.

Makes me all warm and fuzzy…you?

To be clear, there is one thing and one thing only that makes these scenarios and superstar teachers like Sal Khan and others a reality when it comes to K-12 schooling: the knowledge based curriculum. As Frank Smith says in my new favorite book:

Anyone who believes that the acquisition of information is the way we learn is bound to believe that technology will be the best teacher.

If you believe as I do, however, that the way we learn is by doing interesting, meaningful work with others that has a real purpose in the world, and that learning should be the focus in schools, not becoming learned, then you also believe that we need great teacher-learners now more than ever to share space with our kids and to create and change the world with them on a daily basis. Yet those in high places continue to bash the profession from all angles because at the end of the day, they would rather get rid of most of them. Those pain in the butt teachers are too inefficient, too expensive, and too inconsistent to deal with, especially at a time when technology can rectify all of that.

We’re losing teachers because a lot of people with a lot of influence would rather see them go away. But to do that, those same people need to maintain the status quo narrative of what becoming “educated” means. If we want to really solve the looming crisis of teacher shortages, we’re going to have to reconsider and articulate widely the real reasons we want a person in the classroom in the first place.