Facebook Buys a Virtual Reality Company. Each week, Educating Modern Learners will pick one interesting current event — whether it’s news about education, technology, politics, business, science, or culture — and help put it in context for school leaders, explaining why the news matters and how it might affect teaching and learning (in the short or in the long run). We’re not always going to pick the biggest headline of the week to discuss; the application to education might not be immediately apparent. But hopefully we can provide a unique lens through which to look at news stories and to consider how our world is changing (and how schools need to change as well). This week (March 24), Audrey Watters looks at Facebook’s acquisition of the virtual reality company Oculus. 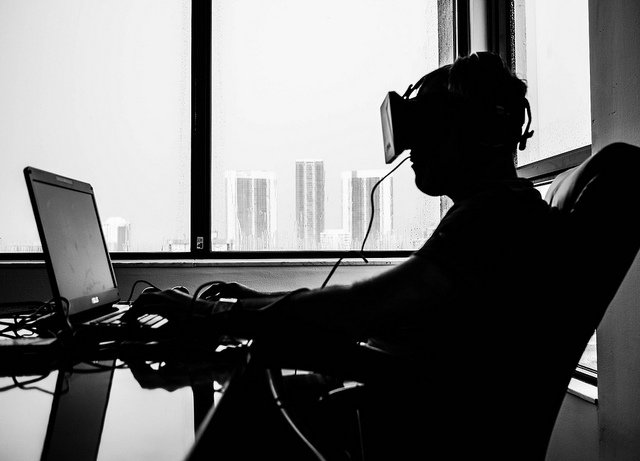 Facebook CEO Mark Zuckerberg announced on Tuesday that his company had acquired Oculus VR, a maker of virtual reality hardware, for $2 billion. Although the promise of virtual reality is hardly new (Jaron Lanier coined the term in the 1980s to a describe computer-simulated environment), there’s been quite a bit of excitement recently about the Oculus Rift headset and its potential for immersive, 3D gaming.

So why would Facebook want to get into virtual reality? And what does this mean for education?

The purchase of a still-speculative technology such as Oculus VR may well be Facebook’s “moonshot” — that is, its attempt to go big and to make the company seem incredibly cutting edge if not utterly “sci fi.” But more likely Facebook has probably learned a lesson from its own failure to hop onto the mobile technology bandwagon fast enough. (Facebook focused for a long time on its website, to the neglect of its mobile apps. It focused too on the ads on its website, to the neglect of mobile advertising. And just think now of the potential for virtual reality advertising!)

Is Virtual Reality “The Next Big Thing”?

Virtual reality may or may not be “the next big thing,” but Facebook is placing a bet that it will be.

Virtual reality might seem far afield from social media as we know it today. In his Facebook status update announcing the acquisition, Zuckerberg wrote that Oculus “is really a new communication platform. By feeling truly present, you can share unbounded spaces and experiences with the people in your life. Imagine sharing not just moments with your friends online, but entire experiences and adventures.”

He added, “Imagine enjoying a court side seat at a game, studying in a classroom of students and teachers all over the world or consulting with a doctor face-to-face — just by putting on goggles in your home.”

Virtual reality has been hyped for years now as a technology that could reshape how we teach and learn. The Horizon Report, for example, has posited for almost a decade now that virtual worlds, augmented reality, and similar tools are “on the horizon.” From the 2007 Horizon Report:

“The use of virtual worlds in education has grown considerably over the past year. Courses now meet in Second Life and other locations. These spaces are used for training emergency response personnel, developing civic participation and leadership skills, visualizing real time weather data, modeling complex mathematical functions, and experimenting with architectural models, among other uses. A consortium of librarians has built an extensive and growing set of information resources in Second Life. Courses from English to Chemistry hold meetings in virtual worlds, making use of their flexibility and powerful building tools to stage dramas and create realistic 3D molecular models. Also on the horizon are open-source versions of virtual worlds like Croquet, Uni-Verse, Multiverse, and others.”

Yet virtual reality has remained stubbornly “on the horizon,” always on the verge of adoption but never really widely adopted.

Could Facebook’s entry into the market change that?

It seems likely that it will. Facebook will pour money and engineering resources into the technology itself and into the business surrounding it. That might be particularly good news for virtual reality gaming, the arena in which most folks find Oculus to be so appealing. But that doesn’t mean it’ll result in widespread development or adoption of VR outside the gaming sector, and it certainly doesn’t mean that virtual reality is the future of education. Immersive worlds for gaming is one thing; immersive virtual school is another.

Of course, Facebook, alongside Zuckerberg’s own philanthropic efforts, has shown some significant interest in education recently. Earlier this year the company announced a partnership with the MOOC provider edX to create SocialEDU, an online education initiative in Africa. That effort coincides with Facebook’s move to expand free Internet access (or at least Facebook access) to the developing world via its Internet.org program. As Zuckerberg repeated in his announcement about the Oculus acquisition, these projects are always framed as part of Facebook’s mission “to make the world more open and connected.”

It’s not too hard to see through this, no doubt. It is not really altruism; it’s business — it’s about expanding the user-base for Facebook, expanding its advertising revenue, and making a nice profit so investors are happy.

The Wisdom (and Funding) of “The Crowd”

One final note on the Oculus acquisition: Its investors are not happy. Well, the investors, that is, who supported the company through a crowdfunding campaign. Oculus raised $2.4 million in September 2012 via Kickstarter. None of those early backers of Oculus receive a payday from the company’s acquisition as crowdfunding doesn’t come with equity — with a financial stake in the company. (Instead, you get a poster or “special thanks.”) As one disgruntled supporter observed,

“Oculus’ sale to Facebook also highlights the disparity inherent in the current capitalist and investment structure, where small investors are excluded from returns by regulation, but investors with more capital can quickly extract more capital by pushing a quick expansion into untapped markets, even without proving that those markets actually, truly exist.”

It’s a reminder — one that educators should certainly heed if they work closely with startups too — about where the power and money remain in technology circles, despite all the rhetoric about the “democratization” of access and opportunity.