Rafranz Davis is an instructional technology specialist for a Dallas/Fort Worth area school district. She describes herself as an advocate for passion-based learning, inspired in part by her experiences with her nephew Braeden. Rafranz and Braeden’s story highlights the challenges that many parents face when trying to advocate for more self-directed learning at school, particularly when “the system” is unsupportive.

A few years ago, my nephew was presented with an opportunity to participate in a pumpkin storybook contest at school, which required him to turn a pumpkin into a storybook character. He was so excited about this project that he rushed into the house with a supply list ready to go which included blue, white and black paint, cotton balls, red felt, and paint brushes. Braeden decided to recreate “Papa Smurf” and as we watched him meticulously turn his vision into reality, we knew that we were dealing with a child with an amazing artistic gift. He was 7 years old.

Braeden’s school did not have space for art.

Over the next year, our family made sure that Braeden had access to as many art supplies as he knew to ask for. With an iPad in tow and his discovery that you can learn a lot through YouTube, Braeden’s list of needed art supplies seemed to grow as quickly as his desire to acquire new skills and techniques. To be clear, these were not assigned projects but explorations born from his curiosity and his abilities.

Braeden’s school did not have space for art.

If it wasn’t on the test, it was not allowed in class. Period. And that included art.

Five days a week, a prescribed homework folder came home that required repetitive math and spelling practice, vocabulary sentences and a weekly reader. Braeden was in third grade, the first year of state testing in Texas. With accountability requirements, there was nothing more important to his teacher and administrator than emphasizing those standards that were to be tested. If it wasn’t on the test, it was not allowed in class. Period. And that included art.

On a good day, Braeden would rush right through his homework in order to develop his projects. Unfortunately, those days were limited because the magnitude of the work itself meant that he could not spare the time needed until weekends to physically develop his artistic visions. Even with a few moments of free time before bed, Braeden found a way to watch a quick video or draft an idea. This was a kid completely driven by the passion to create in spite of a system aimed at hindering it.

The Journey into Puppetry

On a Friday night, I watched The Muppet Movie with Braeden. Saturday morning, he face-timed me to show me the puppet head that he had just completed.  After an apparent binge night of YouTube and rounding up supplies like fleece, plastic spoons, needle, thread and felt from around the house, an 8-year-old Braeden created his first hand sewn puppet. He was so excited that he immediately began simultaneously working on not only planning a new puppet but also improving upon the original that he created.

These weren’t sock puppets but full “muppet style” creations, made with specific purposes born from his “I wonders.” For example, Braeden wondered if he could make a puppet that looked like a lizard that he drew. Beginning with drafts rivaling that of professional designers, Braeden not only made a full arm sized lizard puppet by hand but also plans to turn the lizard into his own puppet show.

For his mother’s birthday, Braeden wanted to make her a bunny so he started with molding a few models using clay and transforming those moldings into one of his most extravagant creations to date, a pink bunny puppet with glove shaped hands for realistic movement.

Braeden is now 9 and in the span of a few months, Braeden created 8 different puppets, a life sized mascot suit and is now in the process of creating puppet number 9, a lion inspired by our hometown mascot. 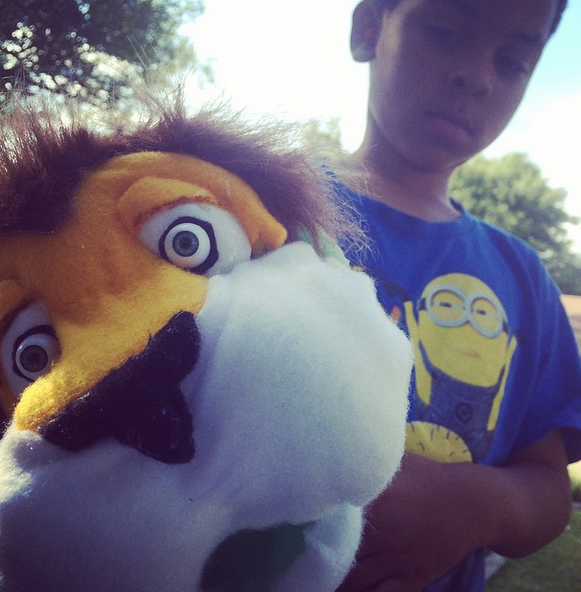 It has been almost one year since the first puppet was created and in that time, we’ve seen Braeden grow in ways previously unimagined. Aside from his artistic abilities, Braeden’s passion-driven creations have empowered him as a research-driven critical thinker and problem solver beyond any form of schoolwork that he could be assigned. He’s still making puppets but he’s also expanded his interest to include Minecraft, digital drawing and animation.

I need to point out that according to OLSAT (the Otis Lennon School Ability Test), Braeden is not identified as a gifted student in his school district, and therefore he receives no additional services or support. Braeden’s creative development happens at home when the homework ends.

Reflections as a Parent-Educator

Watching Braeden’s development opened my eyes to the fact that schools must be a place that not only gently encourages student-driven wonder and creativity but actively carves out a place where self-directed learning is supported. School is where the art of learning should be embraced, not simply to complete state-mandated requirements surrounding “student achievement” but to support a more holistic idea of “growth.”

All children need this.

Braeden is a kid with the privilege of having people in his life who not only recognized his talent but also understood the need to cultivate it. That is, he is lucky to have educators at home, not just at school.

But the fact is, there are far too many “Braedens” who are in schools such as his, without the additional eyes and ears at home. That haunts me daily. It prompts me to share his story, hoping that others will recognize that there are children all around them with curiosity and passion who are waiting for the opportunity to shine.

Braeden’s artistic talents are extraordinary, no doubt. But they were never recognized by traditional assessments or fostered by traditional schooling. Yet Braeden’s initial steps on his learning path are probably becoming more and more common: be curious, turn to YouTube, and tinker.