Amazon Kindle Unlimited. Each week, Educating Modern Learners will pick one interesting current event – whether it’s news about education, technology, politics, business, science, or culture – and help put it in context for school leaders, explaining why the news matters and how it might affect teaching and learning (in the short or in the long run). We’re not always going to pick the biggest headline of the week to discuss; the application to education might not be immediately apparent. But hopefully we can provide a unique lens through which to look at news stories and to consider how our world is changing (and how schools need to change as well). This week (the week of July 21), Audrey Watters looks Amazon’s new “Kindle Unlimited” program and claims that it will end libraries as we know it. 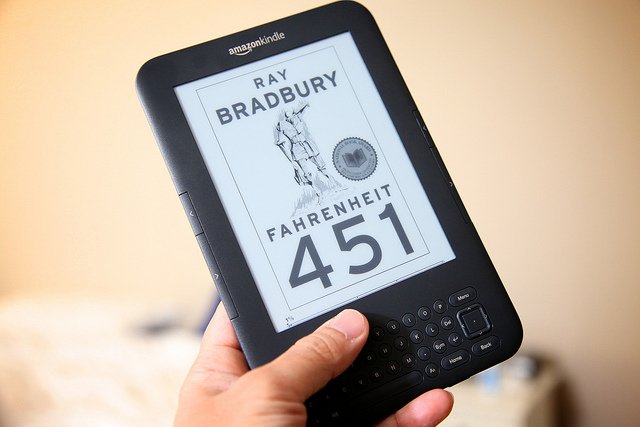 Late last week, Amazon announced a new product, Kindle Unlimited. For a monthly fee of $9.99, subscribers get “unlimited access to over 600,000 titles and thousands of audiobooks on any device.”

As with most major tech announcements, the devil is in the details.

Subscribers can “check out” 10 titles at a time. Of the 600,000 titles, most are from Amazon’s own publishing imprints or from self-published authors whose books were part of another Amazon service, Kindle Direct Publishing Select. While there are books available from traditional publishers (such as Algonquin, Bloomsbury, and Workman), there are none from any of the big 5 publishers at the moment. Many of the titles are also already part of the Kindle Owners’ Lending Library, a service that is available at no extra charge to Amazon Prime subscribers who own a Kindle device. (Those subscribers can only “borrow” one book per month.) It’s not clear, whether or not you’re a Prime subscriber, if Kindle Unlimited is a good deal for readers.

Nor is it clear it’s a good deal for writers. There are concerns from authors and publishers about how compensation works for Kindle Unlimited “check outs.” It appears as though some authors will be paid full price, as if the book was purchased; some will be paid less ($2); and some paid depending on how much of a book is read.

There are also concerns from libraries, many of whom already struggle with publishers’ reluctance to allow library e-book rentals. Those concerns were compounded as the news from Amazon led to calls from some in the business sector to “Close The Libraries And Buy Everyone An Amazon Kindle Unlimited Subscription.”

Many librarians and library patrons responded angrily, arguing that a library offers a lot more than access to a couple hundred thousand e-books. Writing in Inside Higher Ed, Barbara Fister says,

Like many librarians, I’m so tired of being told by people who don’t use libraries that they are an unnecessary expense for a populace that doesn’t read (based, in this case on an inaccurate figure, cited as a “number I recall”; the whole piece is full of “at a guess” numbers leading to the recommendation that we “simply junk the physical libraries”, which the current Tory government is already working on). While I am inclined to not feed trolls, I decided to comment on this piece because Ian Clark made a good argument that they are powerful and attack both public services of all kinds and the people who depend on them. Clark writes persuasively: ‘By speaking up, we are not only defending public libraries but the entire notion of public services. Silence is not how we defend ourselves against an ideological battle, it is how we surrender.’

Over at The Awl, Maria Bustillos writes (warning: headline is NSFW),

Last week, Amazon informed us that for ten dollars per month, Kindle users can have unlimited access to over six hundred thousand books in its library. But it shouldn’t cost a thing to borrow a book, Amazon, you foul, horrible, profiteering enemies of civilization.

Bustillos points to the other places where people can access e-books for free, including the Open Library which offers 6 million titles and Project Gutenberg which has about 45,000 titles. And she reminds us too that many public libraries do offer e-books — the selection is getting better.

But the selection still isn’t great, in no small part because publishers have been reluctant to strike deals with libraries. And when they do, those deals introduce new restrictions into how libraries will function in the digital world — such as HarperCollins’ infamous decision to make libraries’ licenses to e-books only last for 26 checkouts.

Why Does This Matter for Schools?

As schools move from print to digital materials, they frequently find themselves moving from owning books and resources to merely licensing them. While some suggest that this will save money and allow materials to stay more-up-to-date, subscription services do fundamentally change how access works. (You discontinue the subscription for an e-book service, for example, and you could find you no longer have any of your copies.)

It’s important for school leaders to pay attention to the ongoing battles between publishers and Amazon. (EML covered the contract dispute between Amazon and Hachette back in May.) Amazon currently controls about 50% of all book sales. How might this shape “the future of ideas,” as The Atlantic’s Derek Thompson has asked?

How can schools and school libraries make sure that they have access to the books — print and digital — that readers want?